CORRECT timing of sprays to control native budworm when the pests are at high levels is important to protect yields from lupin crops and other susceptible crops including canola, according to Western Australian Department of Agriculture and Food (DAFWA) entomologist, Svetlana Micic. 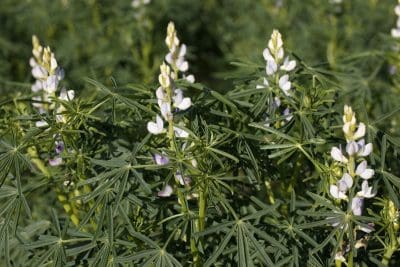 The timing of insecticide sprays in spring is critical for protecting lupin crop yields. Photo: Arthur Mostead, AM Photography.

The area sown in WA to lupins has increased this year on the back of favourable conditions and prices.

While the insect control window has passed for many crops in the State’s northern grain belt, native budworm may still pose an issue in coming weeks in other cropping areas, with lupins typically being the last grain crop to remain green.

She said the pest could be highly damaging to lupin crops during podding and a sweep net was particularly effective for monitoring numbers of these pests.

“Crop monitoring for pests during this time of the year is a task that can be overlooked but I encourage growers to check their lupin crops to ensure that native budworm isn’t robbing them of yields and income,” she said.

“The rule-of-thumb is to use an insecticide if there is more than one budworm per 10 sweeps of a sweep net.

“Growers are advised to sweep the crop in several locations across the paddock.

“The timing of insecticide sprays in spring is critical for protecting lupin crop yields and, for native budworm, it is important not to wait for caterpillars to grow.”

Insecticide use threshold guidelines for WA pulse crops, including lupins, are available at www.agric.wa.gov.au/mycrop/pulse-crops-insect-threshold-levels

A GRDC-funded report ‘The current and potential costs of invertebrate pests in grain crops’ has estimated that the average cost of treating all insects and pests in WA lupin crops is $15.20/ha or $8.2m annually.

It recommends that the economic benefits of controlling pests should be weighed up carefully by growers and advisers as part of an Integrated Pest Management (IPM) plan, as chemical costs can be high.