HEAVY RAIN over much of the Liverpool Plains in north-west NSW in recent weeks has given many growers enough moisture to consider double cropping, provided forecast falls do not further delay the harvest of sorghum and dryland cotton. 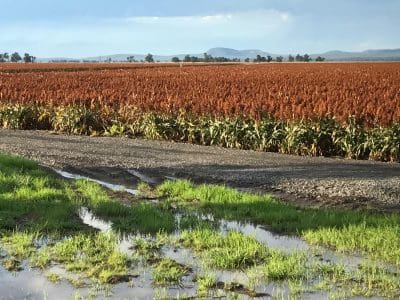 A wet paddock on the Liverpool Plains at Premer with sorghum still to harvest. (Photo: David McGavin)

Agromax agronomist, Sam Simons, said while the rain had been welcomed as the season-opener for winter pulses, grain crops and canola, it had largely stopped the sorghum harvest.

“We’re probably 50 or 60 per cent through on the Liverpool Plains, and the rest is ready to go. The problem now is getting the moisture down after the rain,” Mr Simons said.

The Liverpool Plains, as part of the Upper Namoi cotton-growing area, has supported a very large dryland cotton crop this year.

Before the rain started three weeks ago, earlier crops were being defoliated to ready them for picking.

Mr Simons said barley, chickpeas and wheat would probably follow dryland cotton, harvest of which was unlikely to finish in time to allow paddock preparation for a timely planting of canola or faba beans in the second half of April.

“Chickpeas can be planted right into July so that might be what you’d go in with after dryland cotton.

“A fair bit has been defoliated, and if this rain tomorrow is 10-15 millimetres instead of 30-50mm, it shouldn’t hold things up much.”

Oats and winter wheat were already being planted on previous falls.

“Where there’s ground cover, it’s taking a long time to dry out.”

Breeza grower, Andrew Pursehouse, said the rain would help to fill the top bolls in dryland cotton crops in the region’s later areas, and had buoyed prospects for winter cropping.

“It’s set us up nicely for a winter crop, but there won’t be any cotton coming off for a month, and picking won’t be over for another month after that,” Mr Pursehouse said.

Another factor for growers and their advisors to consider is the effect harvesting cotton with a 30-tonne baler picker will have on soil compaction.

In recent years, these units have largely replaced the much smaller and lighter pickers that collected lint for compaction in module-builders.

Baler pickers weigh around 30 tonnes, and their wheel tracks are likely to compact heavier country holding significant moisture in the upper profile, which may present problems for those growers planning to double crop.

CSD agronomist, Rob Eveleigh, said everyone in the Upper Namoi had had at least 50mm of rain in the past three weeks, and some pockets had had up to 250mm.

“We’re in unknown territory. We haven’t had a really wet pick with them since they were introduced, but they do have reasonable flotation so that might help,” Mr Eveleigh said.

Quirindi Grain principal trader, John Webster, said while baler pickers did “a great job” in the dry, their weight would go against them if the wet weather continued.

“One round baler replaces two four-row pickers, but if we get another big rain, a bloke battling along with an old four-row picker and a module builder might be in front.”

“A month ago we had those 10 stinking hot days well above 40 degrees, and that was at flowering and grain-fill so it knocked the crop around.

“If we didn’t get rain this month we were in a lot of trouble.”

As a result of the relentlessly hot summer, Mr Eveleigh said dryland cotton yields were “a real mixed bag”, even before the rain.

“Eighty per cent of the yields are well below average, and the rest is average or better, but with rain on top, there will be discounts for fibre length and micronaire.”

In total, the Upper and Lower Namoi valleys will be harvesting a cotton crop of 116,000ha this year which will produce around one quarter of Australia’s cotton.

Around one third of the total Namoi crop is dryland, and is concentrated in the Upper Namoi.

“In the Upper Namoi, a few guys are defoliating, and would be picking if it hadn’t rained,” Mr Eveleigh said.