Locust numbers on the rise, but plague risk remains low

AUTHORITIES are keeping a ‘watching brief’ on locust activity in south-west Queensland, north-west NSW and the north-east of South Australia where numbers are at medium levels but the risk of widespread swarm infestations affecting agricultural areas in autumn remains low.

“In terms of what will potentially happen, it is dependent on the weather over the coming two months. Given there has been reasonable rainfall across the areas where there are higher density locusts, those locusts there are likely to breed and set up a larger autumn generation,” he said.

“Then it depends on what happens with (weather) fronts and troughs as to whether we end up with a significant migration of that generation in autumn into the traditional grain-growing areas of south-west Riverina, north-west Victoria and south-east South Australia.”

Mr Adriaansen said the last locust plague was in 2009/2010 when a significant outbreak of locusts affected NSW, Victoria and South Australia. 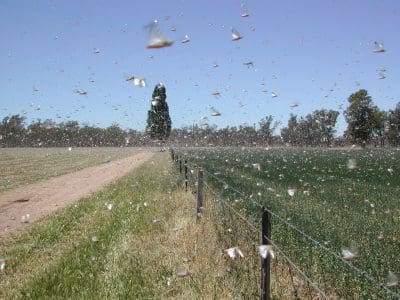 “That was a plague event. We are nowhere near that at this stage. In fact, the population has been very, very low for the past five years,” he said.

“It is only starting to rebuild now from that very low base, given the rainfall we had late winter and early spring.

“There is a long way to go before we reach anything like a plague, but obviously we are continuing to watch the areas of high density and the impact they may have further afield.”

Mr Adriaansen said the biggest potential at this stage was for the autumn generation of adults in late March/early April to move down into the grain-growing areas from further north.

“If the opportunity arises for us to do some control of those locusts before they take to the wing and migrate southwards, we will be doing so,” he said.

“But the risk is that if the population remains fairly widespread at low densities, it is only when the weather systems hit that they aggregate and form large swarms that move southwards.”

Mr Adriaansen said recent heat waves had probably taken out a percentage of the locust population, particularly the young ones, but the impact would be minimal.

“These are very resilient ‘beasts’. They can survive floods, fires and heat waves. They are a native insect that has grown up in the Australian landscape for thousands of years, so they are very well adapted,” he said.

“A proportion of the younger locusts may have been affected by the extreme heat, but a lot of that area also received very good rainfall at the end of December and therefore there was plenty of vegetation for them to take refuge in.”

The APLC predicts a summer nymph generation is likely to develop in parts of these regions and an increase in adult numbers will follow in February and March.

Bands are likely to develop in localised habitat areas during January.

The persistence of green habitat conditions will influence survival to fledging stage and the extent of any swarm formation following fledging in February.

The APLC says the probability of those adults producing a further generation of nymphs in March, and the potential for swarm migrations to agricultural areas in autumn, will depend on the distribution of rainfall in February and early March.

There is a moderate risk of significant increases in adult population levels during February, with localised swarm formation and some migrations possible.