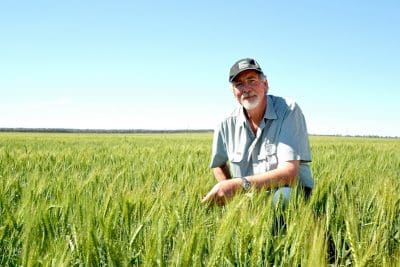 “In these trials, we found pairing long fallowing with the early sowing of wheat was the key to maximising crop yield potential, but there are advantages and disadvantages as with any system, so varietal selection does hinge on your farming system and your environment,” he said.

Dr Fettell said long fallowing and early sowing were complementary practices, as the fallow reduces weeds and diseases, which could be difficult to control in early sown crops.

In turn, early sowing with slow developing wheat varieties allowed the crop to better use soil water stored at depth during fallow.

“Longer season wheat varieties have been grown in central NSW over many years, but their area has declined in recent decades. The millennial drought, less frequent early autumn breaks and a succession of dry springs favouring quicker varieties have contributed to this change,” Dr Fettell said.

“A swing to mainly quicker varieties contracts the sowing window even as many growers are increasing their cropping programs and there is evidence that April-May rainfall is declining.”

Dr Fettell said late establishment could also expose the crop to the increased risk of drought and high temperatures in late spring.

“On the other hand, growers are concerned early sown crops might produce excessive dry matter and use stored water prior to flowering, resulting in poorer grain set and grain filling, leading to a low harvest index and poorer yield,” he said.

“However, in eastern areas, moisture from summer and early autumn rain is now routinely conserved via improved fallow weed control.

“But when it comes to making the right choice for their individual situation growers and their advisers need to carefully consider varietal choice and timing sowing so critically crops flower at the optimum time and reduce risk of frost or heat damage.”

The pros and cons of long season wheat varieties is just one of the topics of the agenda for the GRDC Grains Research Update in Dubbo, NSW, next week.

Global food trends and the opportunities for grain, along with a look at how digital agriculture is delivering vital on-farm information back to growers, and understanding and managing for herbicide resistance are also on the agenda.

The updates will also include the latest wheat and barley disease information, as well as advice on how to prepare or deal with Russian wheat aphids, along with tips for using spray boom technology to improve coverage and reduce spray drift risk. Growers and advisers can also hear the latest research and advice for managing weed seed blowout.

For a full program of topics, more event details or to register go to the GRDC website https://grdc.com.au/Media-Centre/Events