BARLEY growers are urged to monitor for loose smut infection before harvest after low levels of the disease were found in some crops in Victoria. 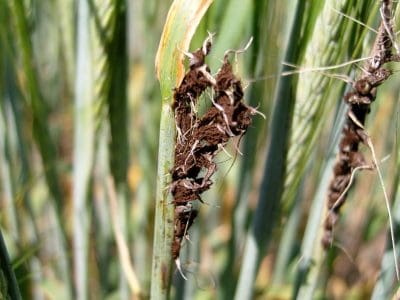 “Due to some barley varieties being very susceptible to loose smut, crops that have been treated have still shown the presence of the disease,” Dr McLean said.

Loose smut is a seed-borne disease that replaces grain heads with smut, which appear as masses of spores.

Once a crop is infected there is nothing that growers can do this season to stop infections.

It is important for growers to estimate smut levels to help decide what to do with infected seed at harvest. This can be done by counting the number of infected heads out of 100 heads in a row.”

Dr McLean said smut spores released at flowering infect florets and the developing grain in the head, which means that next years’ seed will already be infected at harvest.

“Growers should be cautious of using infected seed from this year to sow in 2017,” he said.

“If retaining infected seed for sowing in 2017, growers will need to use an effective seed treatment and ensure good coverage of seed.

“They should also be aware that new seed will likely be carrying a low level of infection and they should always check what, if any, treatment has been applied to this seed.”