MUNGBEAN crops in Central Queensland are starting to flower, heralding the start of serious efforts to control the pest, Helicoverpa. 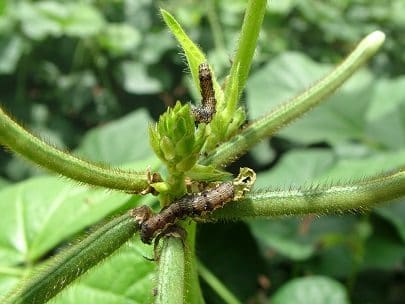 NSW DPI’s Dr Lisa Bird, lead researcher for the Helicoverpa Insecticide Resistance Program, is very concerned about the resistance levels in Helicoverpa to insecticides such as Steward and Altacor, used in mungbeans and several other crops. (Photo: H. Brier, DAF Qld)

Not only is Helicoverpa of significant economic importance for mungbean yield and quality, the introduced species, Helicoverpa armigera, is particularly adept at developing resistance to insecticides.

Having already developed a significant level of resistance to broad spectrum insecticides such as organophosphates, carbamates and pyrethroids, entomologists are strongly recommending that growers make every effort to prolong the effective life of the four newly-registered insecticides for use in mungbean.

She said there had been more than a two-fold increase in resistance to Steward recorded in just one year, to an average six per cent of the population in 2016–17, and as high as 9pc in Central Queensland, where H. armigera are able to survive all year-round.

“Chlorantraniliprole (Altacor) is another newly-registered product in mungbeans where we are seeing early evidence of Helicoverpa evolving resistance,” she said.

“Altacor has proven to be a very useful product, providing excellent knockdown on Helicoverpa, and other important caterpillar pests, as well as providing a significant residual effect and being relatively ‘soft’ on beneficial species. While resistance levels are still below 1 per cent, there is a detectable level of resistance at many monitoring sites and the resistance genes are at risk of spreading across the growing regions.”

Mungbeans and chickpeas are the most widely grown crops that have a heavy reliance on Group 28 insecticides, including Altacor.

Dr Bird said that while resistance frequencies were currently low, an over-reliance on this very effective product would increase frequencies and consequently result in a loss of efficacy.

“H. armigera have a genetic disposition to resist Group 22 insecticides such as Steward,” she said.

“With already elevated levels of resistance evident in NSW and Queensland, along with the fact that Steward is now off-patent in Australia, allowing lower priced products to enter the market, there is potential for increased selection pressure if the use of these products is not managed carefully.”

To combat the threat of resistance development, the following recommendations are made:

“Helicoverpa moths are highly mobile, with the capacity to move between regions. This mobility potentially increases the risk of further exposing populations of Helicoverpa previously selected for resistance,” Dr Bird said.

“Adherence to the resistance management recommendations is particularly relevant in regions where both chickpea and mungbeans are grown. These recommendations do not apply to cotton crops where survivors of conventional sprays used in Bollgard crops would be killed by BT toxins expressed in the cotton plants.”

To avoid unnecessary, or prophylactic, sprays it is essential that growers and their agronomists are frequently monitoring crops and applying sprays in a timely manner to maximise the number of viable flowers and undamaged pods.

There are two new registrations now available to growers – emamectin benzoate (Affirm, Group 6) and spinetoram (Success Neo, Group 5), both of which are comparable to Steward in activity.

Rotating between these four products, and using other insect control measures such as products containing Nuclear Polyhedrosis Virus (NPV), will spread resistance risk across all mode of action (MoA) groups and extend the effective life of all four pesticides.

All four are ingestion products, so good coverage is essential.

And consider using higher water volumes and a different nozzle setup if the crop is particularly large or dense.

These four insecticides are also registered for use in a number of other crops and for other insect pests.

This potentially increases the number of applications throughout both summer and winter and increases the level of secondary exposure in Helicoverpa, both of which can heighted selection pressure for resistance.

Queensland Department of Agriculture and Fisheries entomologist, Hugh Brier, said growers and agronomists should use threshold calculations to ensure sprays were only applied when it was economic to do so and to maximise beneficials to control survivors, further reducing the risk of resistance developing.

Given the short duration of mungbean crops, two sprays for Helicoverpa should be considered a maximum and, in most crops, one spray suffices.

Application of NPV early in the season will assist the strategic use of other options to control Helicoverpa later in the season.

“In the event of sustained Helicoverpa pressure, growers need to consider how they can rotate Altacor, Steward, Affirm, carbamates and NPV.”

The Australian Mungbean Association president, Mark Schmidt, urges growers and agronomists to implement the general principles of integrated pest management to avoid or minimise the development of insecticide resistance in Helicoverpa.

“Helicoverpa are the most economically-damaging insect pest in mungbeans and it is essential that growers have as many options as possible available for their control,” he said.

“The AMA applauds the research efforts that have been committed to developing these recommendations and encourages growers to take every opportunity to implement a diverse and integrated insect management program to slow down or prevent further insecticide resistance.”