THE need for techniques to improve grain yields and manage costs in the face of a drying climate is common to many areas around the world, but in the Eastern Wheatbelt of Western Australia it is even more critical. 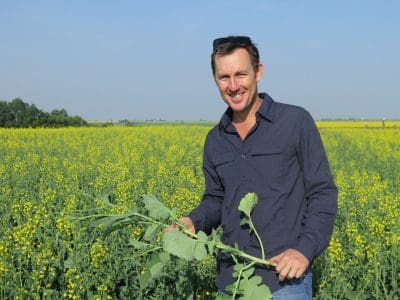 2014 Scholar Bob Nixon on his family’s property near Kalannie in WA. He travelled to several countries studying managing yields when farming in a dry climate.

2014 Nuffield scholar Bob Nixon has looked into ways of reducing risk in this area’s cropping system given low rainfall and yields.

He has focused on adding low-risk crop diversity, as well as techniques to manage costs and lower the break-even yield.

“A 10-15 per cent decline in winter rainfall and an increase in seasonal variability has created serious challenges for farm businesses in the Eastern Wheatbelt of Western Australia,” Mr Nixon said.

“On many Eastern Wheatbelt farms, the 10-year wheat average has dropped 250 kilograms/hectare since the end of the 1990s.

“Crop rotation and diversity are powerful tools in managing cereal production costs because they lower disease and weed burdens in a paddock whilst enhancing cereal yields. In the Eastern Wheatbelt, canola has replaced legumes as the main rotation crop due to factors like the soils high salinity, acidity, sodicity and the current dry and variable climate.”

Mr Nixon and his family operate a 18,500-hectare broadacre cropping and sheep property near Kalannie, in the Central Wheatbelt.

The operation consists of wheat, barley and canola, while the Nixons are currently selling their Merino sheep enterprise.

For his studies, Mr Nixon travelled to Canada, the United States, Mexico, Brazil, Argentina, Kenya and Italy and he has concluded that crop rotation is essential to maintaining crop yields. 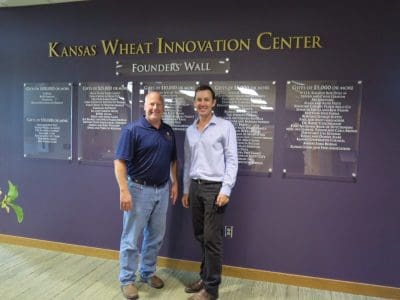 He now recommends growers in the Eastern Wheatbelt adopt several strategies in their farm management plans.

“Break crop strategies where growers are combining a chemical fallow and improved oilseed traits will underpin ongoing success in the Eastern Wheatbelt,” he said.

“Lighter soil types play a larger role in generating profit in drier years. It is important to cost-effectively fix soil constraints like pH to maximise their production.

“There is also a need to retain ground cover to protect soil and keep it soft and friable to support dry seeding, so the use of livestock should be evaluated. Dry seeding is the main driver of improved machinery and water use efficiency in the Eastern Wheatbelt.

“The agricultural industry also needs to focus on up-skilling management and employee capacity to manage economies of scale. As farm size increases, so must the capability to pay attention to detail with management becoming the limiting factor.”

Mr Nixon said business diversification and value adding were difficult to achieve in the Eastern Wheatbelt due to lack of water, high labour costs and limited product range for value adding.

“We have no choice but to rise to the challenge to be the most efficient, lowest cost producers in the world with the flexibility to adapt to change,” he said.

“High input costs will most likely be here to stay so the goal is to achieve the same yield with more efficient use of inputs.”

Nuffield Australia provides opportunities to Australian primary producers and managers to travel the globe investigating a research topic important to them and Australian agriculture. Scholars are provided with a $30,000 bursary to embark on a 16-week program consisting of both group and individual travel over an 18-month period. The application period opened on April 1, 2017 and closes June 16, 2017. For more information, visit www.nuffield.com.au.