DESICCATION and crop-topping involving the strategic application of a registered herbicide close to the final maturity of a crop before harvest in a lupin/pulse, canola or cereal phase can be a useful on-farm management tool. 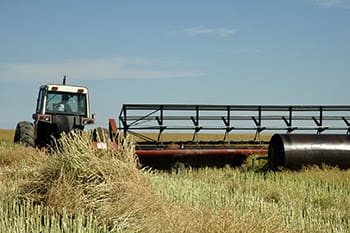 Desiccation used in conjunction with windrowing/swathing is a useful tool to prevent weed seed set and lower the weed seedbank. Photo: GRDC

According to the Western Australian Department of Agriculture and Food (DAFWA), they can be carried out to meet different objectives, including to:

Desiccation with a non-selective herbicide terminates crop growth, regardless of the development stage of weeds, and encourages the even ripening of crops with fewer green weeds at harvest.

If carried out when weeds are green and growing, desiccation (used with or without windrowing/swathing) can significantly reduce weed seed set.

It is recommended desiccation is timed just after crop physiological maturity. Research and grower experience in Western Australia indicates weed seed set control will be higher if the crop is more mature than the weeds at the time of treatment. This is more common in a cool wet spring.

Early maturing varieties of all crop types are well suited to this practice.

Desiccation and windrowing can be particularly beneficial in WA’s southern grainbelt areas that are prone to late season rainfall by helping to manage the risks of weather damage and grain contamination at harvest.

It can also be useful in lupin/pulse crops in some years to dry-out green/ripe wild radish (Raphanus raphanistrum L.) pods prior to harvest, when these can contaminate grain samples.

Other reasons to consider using crop desiccation in WA include:

Field trials at Mt Barker and Katanning from 2010-13 carried out by the Department of Agriculture and Food WA (DAFWA) used a 7.6 metre wide swath on canola crops pre-harvest, followed by desiccation with several herbicides in October-November of each year.

On average at this site, spraying on the swather with glyphosate (using Nufarm Weedmaster® DST® – which is the only glyphosate product registered for this use) reduced viable annual ryegrass seed production by 45pc in 2010 and 43pc in 2011 compared to the average of the control plots with no desiccation.

In 2013 at the Katanning trial site, desiccation at 20pc seed colour change and 80 litres per hectare water with glyphosate significantly reduced annual ryegrass viable seed set by an average of 97pc compared to the control plots.

For full results from this project, contact Glen Riethmuller, DAFWA, at: [email protected]

Crop-topping with non-selective herbicides and then burning windrows the following autumn can be particularly useful in attacking annual ryegrass seed numbers to lower weed burdens.

It involves the application of a sub-lethal rate of a non-selective knockdown herbicide, such as glyphosate (Group M) or the Group L actives paraquat and diquat, close to crop maturity and when weeds are at flowering or early grain fill. 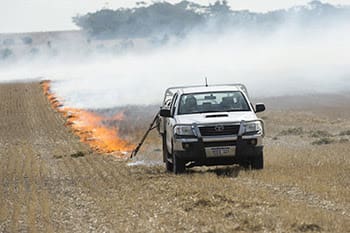 In WA, non-selective herbicide registrations for crop-topping are mainly limited to use in pulse crops and predominantly target annual ryegrass.

Timing is critical to success and, for annual ryegrass, this is just past the weed flowering stage and when the pulse crop is as mature as possible (for lupins the recommendation is at 80 per cent leaf drop).

There is a risk of some crop yield loss from crop-topping and product labels should always be checked for specific directions.

Other key benefits of crop-topping in WA systems include:

If weed seed capture or destruction are the objective, DAFWA and WeedSmart researchers recommend harvesting/swathing desiccated and/or crop-topped crops as soon as possible (mindful of any withholding periods).

Crop-topping increases the speed that weeds die-off and drop their seeds on the ground.

This makes capture and/or destruction of weed seeds at harvest in chaff carts, bales of straw, windrows for burning/grazing or the Harrington Seed Destructor (HSD) important.

It is advised not to use crop seed from desiccated or crop-topped paddocks for planting the following year, as there is a risk of lower vigour.

Late season herbicide use for desiccation and crop-topping

Registration for late season herbicide use varies by crop type and there are strict rates and withholding periods for harvest and livestock grazing following desiccation and/or crop-topping.

These tactics are best matched to crop and weed plant development stage and harvest can start as soon as the harvest withholding period has been observed. Paraquat, diquat and glyphosate are options for late season use in some crops.

It is important growers are aware of maximum residue limits (MRLs) and refer to the product withholding periods.

If marketing grain overseas, it is also important to refer to the overseas MRLs.

WeedSmart and DAFWA recommend desiccation and crop-topping tactics be carried out as part of an IWM plan that might also include cutting crops for hay, green or brown manuring and/or using harvest weed seed control (HWSC) measures.