Matricaria weed on the nose

THE bright yellow – and foul smelling – matricaria weed is spreading across Western Australia’s grainbelt where Kwinana East port zone growers have identified it as an increasing threat to their businesses. 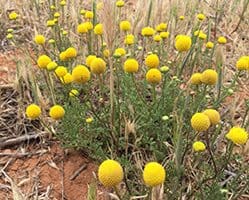 WA’s eastern grainbelt growers are grappling with the increasingly problematic weed matricaria and are advised to map where they see it this spring/summer to help with control next year. (Photo: DPIRD)

Many growers have reported that both types of matricaria found in WA (Columba Daisy – Oncosiphon suffruticosum – and Globe Chamomile – Oncosiphon piluliferum) are very difficult to control in pasture once they have taken hold. These weeds spread quickly due to a big seedbank that can remain viable for up to five years.

WA Department of Primary Industries and Regional Development (DPIRD) research officer Alex Douglas, Katanning, said matricaria had been reported on a range of soil types in Southern Cross, Mukinbudin, Merredin, Kellerberrin and Beacon – and a population had recently been found near Esperance.

Ms Douglas is studying the biology and control options for this weed as a part of a five-year project (UA00149), with GRDC investment, which is also looking at stinking lovegrass, Feathertop Rhodes grass and marshmallow in the western region.

She said initial research into matricaria management was focused on seed set control options for the pasture phase to help reduce the weed seedbank.

Control is difficult while the plant is flowering, but she advises growers to note where they are finding the weed and be prepared for control in 2018 when small plants emerge.

Preliminary results from field trials at Merredin and Mukinbudin indicate herbicide timing and combination will be critical and applications are best made before plants are fully flowering next year.

Ms Douglas said a few plants might have germinated in late winter and might continue to grow and produce seed during the summer period of 2017-18 if there was sufficient rain.

Growers are urged to report sightings of matricaria to DPIRD via the free Pestfax Reporter App (suitable for iPhone and Android) (note, matricaria appears as a ‘problem’ under the ‘host’ situation – crop, pasture etc) Or, growers can send photos and sightings to [email protected] and contact her on: 0455067755, [email protected]