MOUSE numbers remain moderate throughout South Australia, Victoria and southern NSW, according to the monitoring program run by the CSIRO and Centre for Invasive Species Solutions. 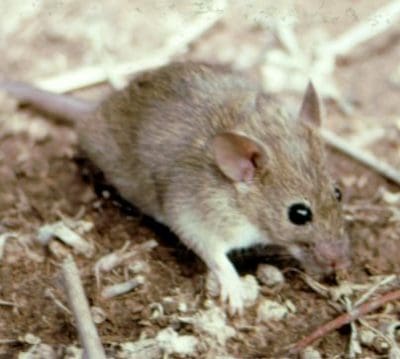 Moderate populations of mice for this time of year were detected at sites in north west Victoria, the northern Adelaide Plains and the Yorke Peninsula, creating potential risk of damage to crops leading into spring.

Mouse abundance remains low in all other regions (Figure 1). 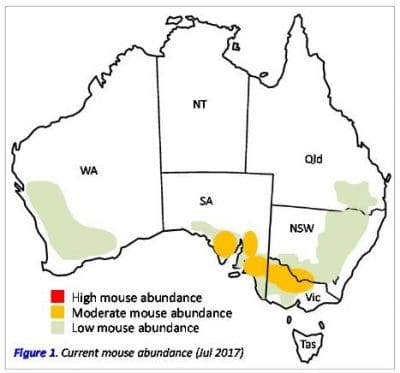 Authorities say mouse numbers will continue to decline through winter and will not breed up again until early spring.

However, growers should actively monitor mouse activity and look for signs of mouse damage (chewed tillers and nodes):

Mouse numbers have declined in the north Adelaide Plains, Yorke and Eyre Peninsulas but remain moderate for this time of year (Figure 2).

Trap success at Mallala (north of Adelaide) was 13 per cent in June (moderate) despite widespread baiting.

Density estimates were 30-50 mice/hectare (anything over 200 mice/ha will cause economic damage).

Widespread damage occurred at sowing and mouse signs and activity were highly variable between paddocks.

Growers should remain vigilant and act accordingly if damage is likely during crop growth.

Mouse abundance remains moderate in all locations. Mouse numbers are moderate across the Mallee and Wimmera regions (Figure 2).

Some damage occurred at sowing.

Growers should remain vigilant and act accordingly if damage is likely.

Mouse signs and activity was moderate in some paddocks, but low in others (from active burrow counts).

Mice are not likely to be a problem, but if growers observe any activity, they should report it on MouseAlert.

Mouse numbers are moderate in Southern NSW and low in Central and Northern locations.

There is activity on freshly sown wheat and activity in rice stubbles around Coleambally.

Mouse damage was reported from almond orchards in southern NSW.

Low activity in Central West (a few cards chewed and a few active holes) and very low around Moree.

Data for Central NSW were collected as part of the CWFS “Rain Grain and Stubble” GRDC project.

Mouse activity is low in all locations. Ravensthorpe and Geraldton: Nil or low activity reported (a few cards with chews and evidence of a few holes). No baiting.

“Growers and advisers in the Wimmera and Southern Mallee are reporting continued mouse activity through winter,” Ms Pritchard said.

Ms Pritchard said moderate mouse numbers could still cause significant damage to crops in spring, depending on the growth stage of the crop.

“Mice can reduce crop yields as they chew growing stems and nodes,” she said.

“They can drop seed heads by chewing through the top node at flowering and also damage maturing heads and pods.

“Crop damage in spring can be insidious and may not be noticed without monitoring and the key to preventing crop damage is recognising and treating infestations early.”

Wimmera and Southern Mallee grain growers and advisers have the chance to learn about the impact of high mouse numbers on crops in spring in a series of forums in early August.

The keynote speaker at the forums will be Professor Linton Staples from Animal Control Technologies, who will talk about a potential increase in breeding activity when the weather warms up and crops begin to mature.

A series of events is being held, including Hopetoun on 7 August, Taylor’s Lake (near Horsham) on 8 August, and Kaniva and Kalkee on 9 August.