AFTER a strong year for sales in the medium tractor market across Australia, demand has tapered off as producers in the dairy sector, particularly in Victoria, respond to the fall in farm-gate milk prices. 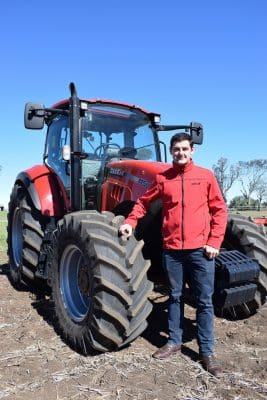 “We have seen some customers hold off making decisions on their next machinery purchases, waiting for a bit more stability,” Mr Elias said.

It has been a similar story for the company’s heavy duty Maxxum and Puma range.

But, at the lower end of the scale, Mr Elias said the market continued to grow strongly for Case’s Farmall B compact tractors that were pitched at the lifestyle and hobby farmer market.

Case has expanded its range in the mid-sized tractor market in the past 12 months with the release of two new models, the Farmall C and Farmall U, making it the biggest offering it has ever had in the mid-range sector.

The Farmall C – a utility tractor that essentially replaced the JXU range – features a number of new developments.

“We updated the complete operator’s environment and we carried across the high/low transmission that we had on our JXU.”

Likewise, the Farmall U, which is a higher specification level than the Farmall C, has had a serious makeover.

“With that tractor we have taken the transmission from the Maxxum to give a four-speed power shift and a more utility-sized tractor,” he said.

“We carried over the same cab from the Farmall C and took the same engine, but we gave it more functionality with the four-speed power shift transmission.

“We also carried over a bigger hydraulic pump. On the Farmall C it is 64 litres/minute, but we moved to 84l/min on the Farmall U.”

There are some common features between the two, but as you go up the range everything increases in capacity from the front axles, rear axles, hydraulic flow and engine power.