LOW protein issues predicted for this season’s cereal crops may not be as extensive as first thought as the harvest in eastern Australia moves through early wheat and barley crops in central and southern Queensland. 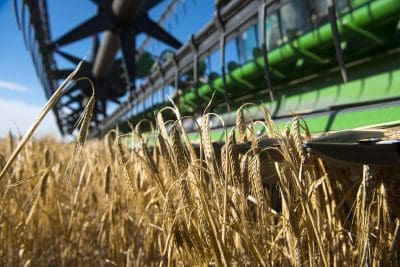 Barley yields have been very high so far this harvest, but some crops have been downgraded from malt to feed grade due to black tip.

AgForce grains president, Wayne Newton, said with harvest well underway in Central Queensland and moving through the western parts of the Darling Downs, there were mixed reports on grain protein levels.

“Undoubtedly there is going to be a lot of low protein, good milling wheat. Everyone has been expecting that because of the sheer size of the crops, the high yields and the good finish,” he said.

“While there is low protein wheat about, I’m also hearing a lot of growers have been surprised how much of the higher protein they have got.

“Because the crops looked like they would be high yielding, the trade was expecting it would be all low protein. But more than 30 per cent has been going Prime Hard or H1 from Central Queensland through to the Western Downs.”

Mr Newton said growers were waiting to see how the market would react to the significant levels of lower-grade grain that would be produced this season.

“For those with feed wheat, the difficulty is going to be finding a home for it in the feed market,” he said.

“On the other side of the equation, a lot of the end users have been sitting back for the last week or so, not committing themselves while they wait to see how the crop shapes up and expecting there will be a large volume of low protein wheat.

“They haven’t seriously got into the market yet. They are sitting back waiting to see how much comes onto the market and how much enthusiasm there is from growers to sell quickly, or whether they are prepared to sit on it or warehouse it.

Mr Newton said another factor impacting on grain quality was the high incidence of black tip in wheat and barley crops this season.

“There has been quite a lot of barley that would otherwise have made malting grade that has been falling outside into the feed category because of black tip,” he said.

Mr Newton, who runs a 1500ha grain and cotton farming enterprise near Dalby on the Darling Downs, said this season was the latest harvest he had seen due to mild, cool conditions in spring.

“Harvest has sometimes finished later because of delays such as a wet season, but this year everyone has been two to three weeks late starting harvest,” he said.

“By this time in November I am usually in the second half of harvest, but we haven’t even started yet.”

In Western Australia where harvest is well underway in the northern and central regions, GrainGrowers regional co-ordinator, Ray Morgan, said there were serious concerns over grain quality in those districts affected by a spate of frost events through September/October.

A feed barley segregation (BFED3) with reduced hectolitre weight (50kg/hl min) and increased allowance for fusarium and distorted grains, as well as a wheat segregation termed ASWE which will accept up to 10 frosted grains and ergot out to five centimetres, will be available this harvest.