THIS Australian Herbicide Resistance Initiative (AHRI) Insight has a bit of a twist. Peter Newman has composed and performed a rap. You can check out the video above and follow the lyrics here:

Busi’s back with a brand new invention

Something grabbed a hold of him tightly

Will he ever stop, I don’t know

Turn off the lights and he’ll glow

Testing was a problem, Busi has solved it

Check AHRI insight while my DJ revolves it. 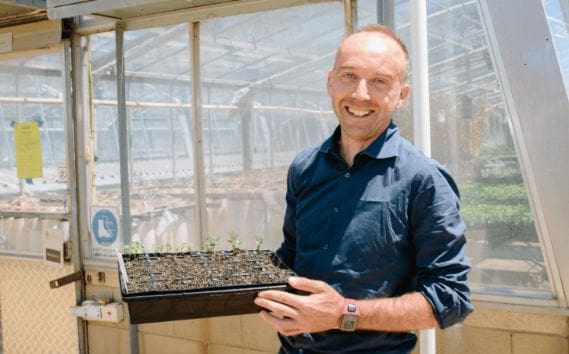 And the results? There are lots, which we have summarised into ten key findings from this research.

South Australia and Victoria are epicentres of resistance to Sakura® (pyroxasulfone), Prosulfocarb and trifluralin.

NSW has the highest levels of resistance to glyphosate.

All states have significant clethodim resistance with Western Australia leading the pack.

And possibly the most significant results of all – Herbicide Mixtures Rock!

Such a large study produces a lot of data that is too great to summarise in a few dot points so we have distilled it down to 10 key messages.

We’ve said it before and we’ll say it again, herbicide mixtures are exceeding our expectations and have a big part to play in managing resistant weeds.  There is no better example than checking out the Trifluralin + Sakura mix in NSW and Victoria below compared to these herbicides stand alone. Luximax + Triallate was the winner in the mixtures competition.

“Of course it did well”, you might be thinking, “it’s a brand new herbicide”! Yes, Luximax is new, but there is a risk with any new herbicide that there may be existing cross resistance from all of the herbicides we have used in the past. We previously reported that “Luximax gets it’s own box” here https://ahri.uwa.edu.au/luximax-gets-its-own-new-box/ and this research is further confirmation.

Still very little or no resistance to this herbicide in Australia at this stage which is both pleasing and remarkable.

There were only 25 populations tested from NSW, all from the low rainfall, western districts. The agronomists taking these samples find that their area does have low levels of resistance to pre-emergence herbicides but they weren’t expecting it to be quite this low. 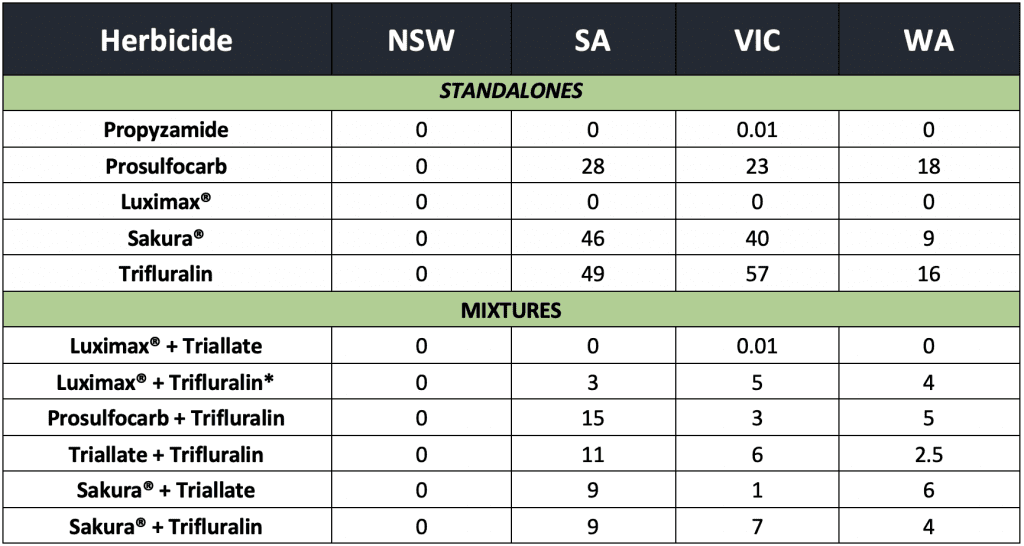 Sure, WA is leading the pack here, but every state has significant clethodim resistance.

Clethodim + Butroxydim is much better than clethodim alone in all states. It’s not the complete answer, and there’s a growing number of populations with resistance to this mix, but it’s a great mix.

This is likely due to all 25 NSW samples coming from the low rainfall area where chemical fallow has been a significant part of the rotation. The agronomists who took these samples were alarmed, but not surprised.

Hooray, some good news! No paraquat resistance was discovered in this research, however, we do know that paraquat resistant ryegrass exists and several populations were confirmed resistant in 2021. We also know that many growers have switched to double paraquat knockdowns (paraquat followed by paraquat) in NSW and Vic with great success. We need to develop strategies to look after paraquat with this practice. A good start is to ensure that we mix a group 14 (G) herbicide plus a pre-emergent herbicide with the second paraquat.

579 ryegrass populations were collected from 298 farms at the end of the 2019 growing season: NSW (25), SA (98), VIC (104) and WA (352). Fields were chosen according to the grower or consultant’s interests so it is important to point out that this is not a random survey. Seed samples were screened in February to March, 2020 as part of the summer-autumn season in a cooled glasshouse (25oC average temperature).  The herbicides Luximax®, Sakura®, prosulfocarb, trifluralin, glyphosate and paraquat were tested in winter with the rationale of assessing herbicide efficacy at a lower temperature (16oC average recorded during the winter study)