NEW research is proving the dramatic impact of stubble retention on soil moisture, with preliminary trial results showing a variance of up to 150 millimetres in rainfall requirements to fill soil moisture profiles. 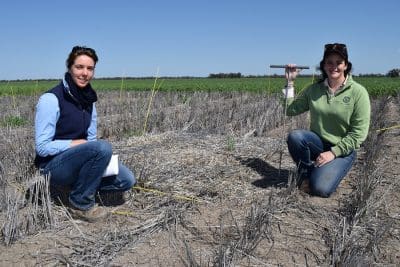 The research is being conducted by the Northern Grower Alliance (NGA) – a grower solution group funded by the Grains Research and Development Corporation (GRDC) that coordinates and conducts applied agronomic research in response to the needs and priorities of northern grain growers.

One of these trials was established in southern Queensland near Mungindi in November 2015, shortly after harvest of the 2015 wheat crop when the soil profile was very dry with available soil water of <30mm to 90cm depth and <150mm to 120cm.

There were also treatments where additional groundcover was added in the form of straw at 5, 10, 20 and 40 tonnes/hectare.

EM38 assessments were undertaken in April, June and October 2016 and gravimetric soil cores at the start and finish of the trial.

“As expected, the poorest refill of soil water was where stubble was completely removed,” Mr Daniel said.

“Push probe results in June showed an extra 6-8cm of moist soil under all treatments where stubble had been added to provide additional groundcover.”

“After late summer rainfall they showed that evaporation losses during a dry March and April in the standing stubble treatment were substantial in the top 20cm of soil. These losses were not evident in the 40t/ha added treatment where soil moisture was retained,” Mr Daniel said.

“At the end of the day, this had a massive impact on overall fallow water efficiency with 100mm-150mm of extra rainfall needed to refill soil moisture to the same depth in standing stubble compared to where 40t/ha of stubble had been added.

“Additionally, the Mungindi trial work found that fallow efficiency from last year’s winter crop to this year’s plant was negative. That is, more water was extracted than fell as rainfall.”

Previous stubble cover trial work has tended to focus on infiltration whereas the Mungindi trial is taking the research one step further to investigate the impact of different stubble loads on evaporation.

“This research aimed to determine whether there’s enough merit in looking at options to increase stubble cover by quantifying the impact of different stubble loads on evaporation,” Mr Daniel said.

“The preliminary results suggest that there is merit in looking at options – if we can reduce evaporation, we are talking about an additional 40-60cm of additional wet soil. This supports what growers have previously seen with header trails.

“The big question now is what growers can practically do to increase stubble cover either through management or technology that will allow them to reduce evaporation and maximise their productivity and profitability.”

Another trial site near Macalister on Queensland’s Darling Downs took advantage of the large multi variety root-lesion nematode site from last year and assessed the fallow efficiency of various crops.

The amount of plant available water was measured post-harvest over a range of winter and summer crop types and compared to the refill of soil water after the subsequent fallow period.

Through use of an EM38, small differences in soil water were able to be determined and the amount of fallow water accumulation was directly proportionate to the level of ground cover left by the previous crop.

The trials were established in response to grower and advisor queries over fallow efficiency differences between stubble loads and crop types.

Both the Mungindi and Macalister trials have highlighted how critical fallow efficiency is to effective farming system decision making and management, holding implications for rotation planning, crop and variety selection as well as pest and disease management.