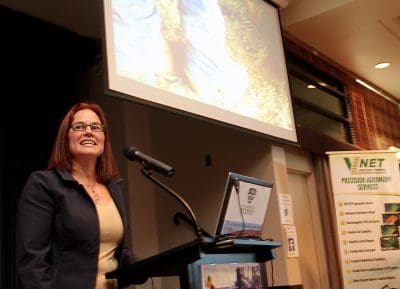 US agricultural technology consultant Lisa Prassack told the 19th Precision Agriculture Symposium, held this year in Toowoomba, that many past technological advances in agriculture had been aided by the fact other farmers could look over their fences and see the benefits for themselves.

“With auto steer and auto-guidance, one of the things people noticed is they looked over the fence and they saw their neighbours with straight lines,” she said.

“And although fatigue reduction was the biggest selling point of the technology, it was really about people looking and saying, ‘hey, they have got straight lines, I need to get straight lines’.

“And the next thing that happened was Roundup. They looked over the fence and they said, ‘hey, he has got clean fields, I need clean fields.

“And that (RoundUp) was the fastest adoption of technology, that was within 18-24 months.

“With data, you can’t look over the fence and really see what your neighbour is doing to make a decision for yourself.”

Despite those hurdles, the uptake of precision agriculture techniques in Australia is growing, as more farmers speak of the benefits they are experiencing from making better use of technology and farm data.

“It varies a lot from State to State, and Lisa’s comment about what is happening over the fence has a lot to do with it,” he told Grain Central.

“From what I see the some of the biggest growth is in areas where farmers can see variability and are asking how they can manage that.

“So in some districts some the uptake of precision ag today may be 50pc, in other districts it may be around 20pc.”

In the past four years, SPAA’s membership base has expanded as the association has broadened its focus beyond the grain sector alone, in recognition of the fact that precision agriculture techniques are relevant to every agricultural sector.

“We want to share what has been learned in the grain industry and make sure research is not repeated that does not need to be, because there is a lot cross pollination between all of the industries.”

“A lot of people think precision agriculture is only about technology, gadgets and electronics, but what we are really about is doing thing better and more precisely.

“So whether it is weed management or pest management or agronomy management, it is how can I manage it better or more precisely than what I am doing now.”

“The benefits are in reducing costs and allocating resources more appropriately.”