WSMV is a seed and mite-borne virus that causes severe leaf symptoms and reduced yields, particularly in wheat.

NSW DPI senior research scientist plant pathology at Wagga Wagga, Andrew Milgate, said the virus had been detected in plant samples taken from throughout the region from the Murray River up into central NSW.

Dr Milgate said the underlying cause of the WSMV outbreak this season was that conditions over the past 12 months had particularly favoured the disease’s main vector, wheat curl mite.

“When we look back through records of virus detection we periodically get years that are particularly favourable to the spread of WSMV and high plains virus. The two occur almost 100 per cent of the time together because they are carried by the same vector, wheat curl mite,” he said.

“To get seasons where WSMV is more prevalent you need certain conditions. That is what we have seen this year. We had a soft summer and a lot of pasture growth over summer allowing the mites to build up. Conditions remained mild without severe frost throughout the winter. So, the mite population hasn’t been checked through any environmental triggers.” 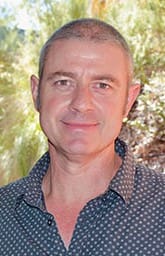 “There is usually a typical pattern of infection that occurs in paddocks where there is grass on fencelines, roadways, gullies or neighbouring pasture paddocks,” he said.

“The mites will migrate from one plant to another. They need a trigger for that to happen.  That is usually environmental, such as the plants they are currently feeding on shutting down and they move on to find a fresh host. Or the population expands to a level where they just start moving.

“The mites don’t pass the virus from one generation to the next. They must feed on an infected plant to pass the virus on. There is a reservoir of the virus existing in grass species. The mites feed on those grasses then transmit the virus into the crops.”

Too late to control

Dr Milgate said at this stage in the season where crops were maturing and approaching harvest there was no action farmers could take to mitigate any losses.

“The worst cases I have seen have been where the virus has been transmitted early in the season or after grazing where the regrowth is stunted and has significant yield losses,” he said.

“There are other examples where the infection has occurred much later in the plants’ life and they aren’t too impacted by the virus in terms of yield losses.”

Dr Milgate said growers needed to be aware the virus could be transmitted on seed which meant that if they had paddocks that were significantly infected by the disease they should avoid using seed from those paddocks for sowing next year.

CSIRO chief research scientist Greg Rebetzke said WSMV was usually a problem in years where there had been a ‘green bridge’ of vegetation over summer.

“Being a wet summer, the risk of either native grasses or volunteer wheat sitting on the outside of crops or that have come up as volunteers has provided a source for the virus mites to move typically on the outskirts of a crop.”

Meanwhile, a researcher from The University of Western Australia’s (UWA) Institute of Agriculture who led a comprehensive review of virus disease research in Australia’s cereal and oilseed crops since the 1950s has warned that Australian agriculture must prepare for “potentially devastating” future virus disease epidemics.

“A comprehensive review of the biology, epidemiology and management of damaging virus diseases of these critically important crops was therefore both overdue and timely,” he said.

All 31 viruses known to infect the diverse range of cereal and oilseed crops grown in the continent’s temperate, Mediterranean, subtropical and tropical cropping regions were included in the review.

Seven of these viruses are currently of major economic importance.

Depending on the virus concerned and climatic conditions, the most important virus vectors that spread each of the 31 viruses were aphids, whiteflies, thrips, leafhoppers or mites.

“Effective virus management is being influenced by increased insecticide resistance in key insect and mite vectors, the development of resistance-breaking virus strains, and insufficient industry awareness of virus diseases.

“Further even more damaging crop viruses and more-efficient virus vector species are also likely to spread to Australia from other world regions.”

Professor Jones said there was a pressing need for more research funding and other resources to focus on addressing virus disease threats to Australia’s grains industries.

“The review recommends that future research into virus diseases in Australian cereal and oilseed crops should be adequately resourced to ensure they are protected,” he said.