THE push is on to develop a fully-fledged mustard growing industry with growers in central west New South Wales taking up the challenge of turning the zesty oilseed into a mainstream crop.

Proponents are working to enlist the support of growers in the central and western farming regions of NSW to form a co-operative for the large-scale production of the crop.

The move is part of a succession/extension of the small, family-owned Yandilla Mustard enterprise at Wallendbeen on the south west slopes of NSW that has been operating for the past 30 years.

Owned by the Wetherall family, Yandilla has grown into a venture producing 200 to 300 tonnes of mustard seed annually.

With the owners retiring, Dubbo agronomist, David Ward, has been appointed to develop a succession plan which has led to the initiative to expand and relocate the focus of production to central west NSW.

Through funding from the Farming Together program, Mr Ward has investigated the potential for establishing a full-scale mustard industry, based around the collaborative and co-op models.

“As a legacy to the foresight of the Wetheralls, we decided to investigate expanding and relocating the Yandilla operation from just a small, family, cottage business at Wallendbeen to central west NSW,” he said.

Mr Ward said he saw big potential for a mustard-growing industry, initially in NSW but ultimately across other farming regions of Australia.

“Mustard is suited to anywhere you can grow canola, but we see an open opportunity particularly west of the Newell Highway where farmers can’t grow canola year-in, year-out because of seasonal conditions,” he said.

“Mustard, being more drought-tolerant and more of a determinate flowering plant than canola, will set a yield, as long as you have your fallow set up. It will get out of the ground quicker, it will hang on a lot longer and you can direct head it instead of having to windrow it. That gives you good cost savings.”

“It is a conventional, non-GM seed so you don’t have the Roundup Ready or triazine-tolerant characteristics. We see that as potentially a marketing advantage to have a non-GM seed and not owned by ‘Big Agri’,” he said. 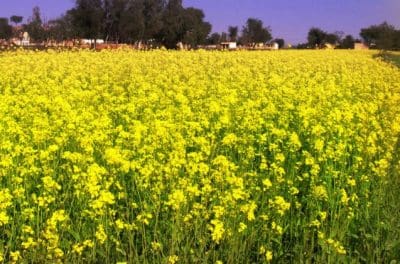 “That fits the collaborative and co-operative model of local, regional and value-adding investment.

“We have planted it into mid-June and haven’t seen dramatic yield decrease from doing so. It can still be a very profitable rotation crop.

Mr Ward said mustard stacked up well against other crops when it came to returns to growers.

“It includes all the insecticide costs, a very generous fertiliser package and direct heading and the PBR royalties to the CSIRO for the seed.”

Mr Ward is keen to attract grower interest in joining the project, but acknowledges there will be challenges, particularly in the current climate.

“The seasons aren’t fabulous at the moment. Talking to farmers and agronomists about any crop at the moment, let alone a new crop, is going to be a challenge,” he said.

“But it has ‘legs’ and there is interest. The big thing is we are looking for leaders who really believe in the project and want to help us grow. We want five foundation growers to come on board as the beginning of the production co-operative and help us drive it.

“We grow under contract. We are encouraging farmers to get online and fill out ‘expressions of interest’ forms to grow.”

Ultimately, Mr Ward said the aim was to create “a mustard industry, not just a mustard business”.

“If we can create a non-GM alternative for farmers to grow a drought-tolerant oilseed in their rotations that is farmer-owned, farmer-controlled and farmer-managed, the proceeds go back into the co-op and the region, not to a corporate bottom line,” he said.

“Agriculture is ‘stuck on that train’, but there are small operations that can move forward. If we can help build an industry out of this it could be a national industry, not just a state industry.”

“At the moment Yandilla are selling the premium mustard oil into North America. A little bit goes in the United Kingdom and some domestically. But the demand is into the Sub-Continent, UK, Europe and the US,” he said.

“The big benefit is that, as far as we are aware, it is the only non-erucic acid, edible mustard oil which has massive benefits as being one of the healthiest vegetable oils with its low saturated fats and balance of omega 3 and omega 6 fatty acids.

“It also has a spice factor. After the crushing of the seed to extract the oil we can either get a spicy, wasabi-flavoured oil or a normal nutty-flavoured oil. The spicy oil is where the premium is.

“We can also extract the spice after crushing. That spice has a big value in natural food additives. It adds a whole new level of value to the mustard seed.”

Farmers can learn more about the potential for growing mustard at a series of free workshops to be held in NSW at:

The Farm Co-operative and Collaboration Program is being delivered by Southern Cross University on behalf of the Australian Government. It comprises a highly experienced senior team drawn from a wide range of commodity groups from across Australia and is backed by an industry advisory group representing experts from Western Australia, Northern Territory, Queensland, Victoria, South Australia and NSW. Visit: www.farmingtogether.com.au