STEPS are underway to co-ordinate the release of the rabbit virus, RHDV1 K5, across the nation in the first week of March as part of Australia’s 20-year plan to reduce negative impacts on agriculture, the environment and communities through managing rabbit populations. 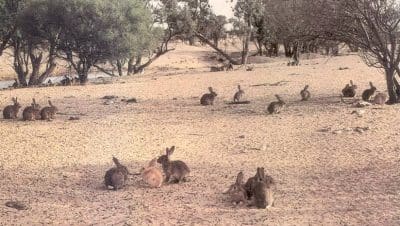 A national rollout of the RHDV1 K5 rabbit virus will occur in the first week of March. Photo: Rabbit Free Australia

Marking a turning point in pest rabbit management, a national mail out has commenced of information to drive the release of RHDV1 K5, the Korean strain of a naturally-occurring rabbit virus first released into Australia in 1996.

RHDV1 K5 is not a new virus; it is a Korean variant of the existing virus already widespread in Australia.

RHD Boost, the national evaluation project set up to oversee the roll out of the virus, found that RHDV1 K5 should work better in the cool-wet regions of Australia where the current virus variant has not been so successful.

RHDV1 K5 was selected out of 38 candidate variants because it can overcome the protective effects of a benign calicivirus which naturally occurs in Australia’s rabbit population. RHDV1 K5 is a naturally occurring variant of RHDV. The virus has not been altered by humans in any way.

It is unlikely that RHDV1 K5 will achieve the population reductions that the 1996 calicivirus release initially did, as it is not being released into a naïve population.

Knockdowns are expected to be on average around 10–15 per cent (ranging from between 0–40pc).

It is important that RHDV1 K5 is used as part of an integrated multi-technique rabbit management program.

In NSW, Department of Primary Industries (DPI) invasive species manager, Quentin Hart, said information kits had this month been mailed to 265 community release sites in NSW, prior to the March release of RHDV1 K5.

“The community is leading and managing the strategic release of the virus across NSW, with support from NSW DPI and Local Land Services,” Mr Hart said.

“Three intensive management sites near Orange, Gundagai and Hay, linked with the community-led sites, will be managed and monitored by NSW DPI and Local Land Services.”

Information kits include specific instructions on how to manage and monitor rabbit control programs, including RHDV1 K5 and conventional management.

NSW DPI advises rabbit owners to vaccinate domestic rabbits and provide additional protection against the virus and myxomatosis by keeping rabbits inside or in insect-proof enclosures.

Pet owners should contact a veterinarian for advice on how to protect their rabbits, with online information available from the Australian Veterinary Association http://www.ava.com.au/rabbit-calicivirus

The national release of RHDV1 K5 has been delivered through the Invasive Animals CRC, with major financial and in kind resources provided by the Australian and NSW governments, CSIRO, Meat & Livestock Australia, Australian Wool Innovation and Foundation for Rabbit Free Australia.