GROWERS and agronomists suspecting the presence of a recently-discovered aphid species which affects vetches, faba beans and broad beans can seek assistance with aphid identification through a Grains Research and Development Corporation-supported service. 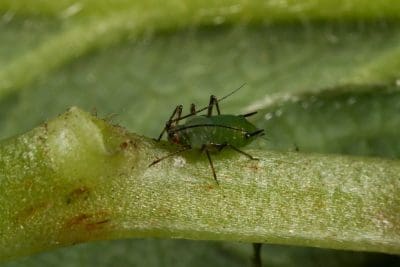 Megoura crassicauda is a new pest in Australia that could impact some legume crops. (Photo: cesar)

Entomologists at cesar research organisation in Melbourne can inspect high quality images and aphid samples to determine whether crops are infested with the new pest, Megoura crassicauda.

The identification service is being made available through the GRDC’s investment in the PestFacts south-eastern invertebrate crop pest information platform.

Cesar entomologist, Julia Severi, says M. crassicauda is an aphid species native to north-east Asia and since its initial detection in suburban Sydney in October last year, its known distribution has now expanded to Tamworth and Breeza in northern New South Wales.

“It is unclear where else the aphid is present, or how quickly it is likely to spread into new regions,” Ms Severi said.

“And while little is known about the potential economic impact, observations of its activity in Australia so far indicate that the aphid has a high reproductive capacity and could threaten faba and broad bean production.”

Ms Severi said the aphid had a very distinctive appearance.

“Adults are dark green and spindle-shaped with long antennae and black legs.

“They are relatively large aphids – approximately 2.5-3 millimetres in length – and have vibrant, red eyes.

M. crassicauda can form mixed colonies with pea aphid and cowpea aphid, two species which are widespread in Australia and infect faba beans and vetch.

While information on the lifecycle and behaviour of M. crassicauda is limited, they are known to reproduce asexually (female aphids giving birth to live nymphs without mating) and sexually (females laying eggs after mating), according to Ms Severi.

In terms of management, there are no current registered insecticides for this pest.

Dimethoate is registered to control aphids in faba beans. Paraffinic oil is registered for use on faba beans and vetches to provide suppression of green peach aphid. Initial work conducted by New South Wales Department of Primary Industries (DPI) using pirimicarb was efficacious.

Permits for the use of pirimicarb, dimethoate, chlorpyrifos and lambda-cyhalothrin in faba beans and vetch are being sought.

Meanwhile, further surveillance is now being undertaken by NSW DPI in the growing areas of northern NSW.

Detections of unusual aphid species should be reported to the appropriate biosecurity agency. The Exotic Plant Pest Hotline number is 1800 084881.