TRIALS of a relatively new approach to fertilising dryland cereal crops during the growing season have entered their second year, following promising results in 2016. 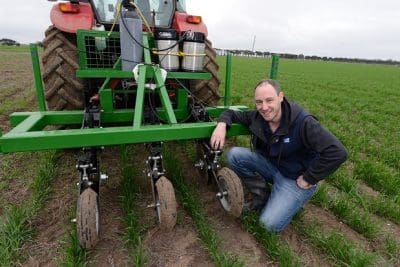 Mid-row banding of nitrogen (N) in-season increased uptake of nitrogen fertiliser in wheat by more than 50 percent – when compared with other methods of in-season N application – in Victorian trials last year.

Agriculture Victoria’s regional research agronomist Ashley Wallace, who has undertaken the work as part of the Grains Research and Development Corporation (GRDC) and Victorian Department of Economic Development, Jobs, Transport and Resources (DEDJTR) Bilateral Research Agreement, describes the outcomes from the trials as encouraging.

“Trials of mid-row banding of N in-season have produced promising results, including increasing fertiliser uptake by an average of 46 per cent and up to 52pc in wheat when compared with other methods of in-season N application,” Mr Wallace said.

“The method also boosted grain yield by up to 0.5 tonnes/hectare.”

Results from mid-row banding trials in 2016 – an exceptional year in terms of rainfall and yields in many parts of the southern region including the Wimmera and Mallee where the trials were conducted – are being validated this year, with further trials currently underway at Ultima, Horsham and Telangatuk.

Mr Wallace said there had been a significant swing towards in-season management of N fertiliser in southern dryland cropping regions as growers looked to improve management amid variable seasonal conditions.

The crop’s demand for N is largely determined by its yield potential, which is strongly related to growing season rainfall.

“The time when crops are sown is a period when seasonal forecasts and hence yield predictions have limited accuracy,” Mr Wallace said.

“This makes decisions around N application up-front difficult and risky. Applying N during the growing season better matches the timing of application to crop demand.

“Unfortunately, surface application of N fertilisers such as urea during the growing season increases the risk of N loss through volatilisation.

“Mid-row banding of fertiliser, where N is applied below the surface of every second inter-row, has the potential to reduce this risk, where the current research has focused on application during the growing season, rather than up-front at sowing.”

Last year’s trials at Longerenong and Quambatook were undertaken in collaboration with BCG (Birchip Cropping Group) and aimed to compare mid-row banding with other forms of in-season N application, including top-dressed, liquid foliar and mid-row surface applications of N.

Mid-row banded treatments of liquid N were applied using a purpose-built three-point linkage mounted fertiliser banding gear which used twin disc openers to place fertiliser at a depth of 30 millimetres below the soil surface. Each pair of discs was followed by a press wheel to assist with furrow closure.

Fertiliser treatments were applied at one of two times between the start of stem elongation and second node growth stages.

This approach was used to examine the effects of rainfall following application on potential losses of N and fertiliser use efficiency of the crop.

“Results from 2016 indicated that the benefit of mid-row banding to crop uptake of N was greater where rainfall was limited soon after application and the surface applied urea was not washed into the rooting zone,” Mr Wallace said.

“This indicates that mid-row banding could be a more effective way of applying N under drier seasonal conditions.”

GRDC manager soils and nutrition – south, Stephen Loss, said it would be important to test mid-row banding in a range of seasons and situations to work out when and where growers would get the biggest bang for their buck.

“With 2017 looking like a more typical season, this year’s trials will provide another layer of data to inform industry about the potential benefits of applying N in-season through mid-row banding,” Dr Loss said.

He said that even if results from this year’s trials were again positive, any future adoption by growers would require careful consideration of economic and practical factors, such as the availability and the cost of mid-row banding machinery, the speed with which operations can be undertaken, and potential crop damage in comparison with existing methods of spreading N fertilisers.

Such changes may also have impacts on other elements of the farming system that should be considered, such as the effect of inter-row disturbance and fertiliser application on weed germination and growth.

A report of the 2016 trial results, co-authored by Mr Wallace, is available for viewing and downloading via the GRDC website at https://grdc.com.au/mid-row-n-fertiliser.