A CHALLENGING 2017 growing season in the central west and Riverina regions of New South Wales gave researchers an opportunity to compare the yield outcomes of new barley varieties against proven performers over different time of sowing dates. 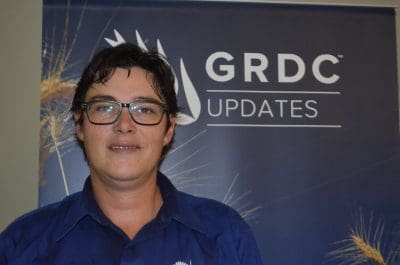 A joint research investment by the NSW Department of Primary Industries (DPI) and the GRDC, the work was led by Condobolin-based NSW DPI research agronomist, David Burch.

Mr Burch said the flowering dates and yield responses for 16 new varieties were assessed against the high-performing HindmarshA and La TrobeA varieties over a range of sowing dates in central western NSW.

Lower than average winter rainfall and widespread frosts throughout much of NSW resulted in a 56 per cent drop in total barley production for 2017, compared to the previous record harvest in 2016.

Mr Burch said it was important for growers to be aware of the differences in a variety’s patterns of growth when making varietal and sowing decisions, in order to maximise yield.

“Early flowering varieties such as HindmarshA and La TrobeA have become popular due to their yield stability in medium to low rainfall cropping zones, but early flowering dates expose the crop to the risk of frost damage,” he said.

Condobolin received below average rainfall at the beginning of the growing season, and was impacted by 84 frosts throughout the flowering period, with 26 nights of temperatures below -2°C.

The highest yielding variety in all treatments was La TrobeA, while CompassA had equal or lower grain protein concentrations to La TrobeA.

There were significant effects observed between varieties and sowing dates. The May 12 (mid-season) sowing date had the greatest grain yield overall, with a mean yield of 1.68 tonnes/hectare in Condobolin.

All varieties with the exception of FathomA and RGT PlanetA incurred a yield penalty in the late sowing, compared to mid-season.

This experiment and those done in prior years indicate that in the central west of NSW, the target flowering date is the last week of August to the first week of September, in order to avoid frost induced yield losses and ensure sufficient soil moisture for grain fill.