PIONEER has launched a new gritting corn hybrid, P1888, at a field day on the Darling Downs in southern Queensland. 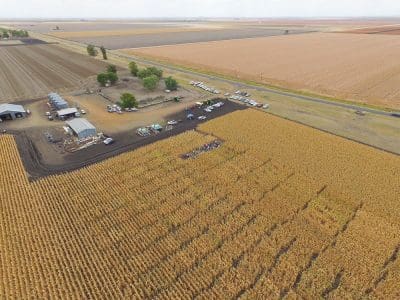 “We are very excited to launch our new P1888 gritting hybrid and we have been extremely happy with its high yields and strong trait package over multiple locations and years,” Pioneer regional sales manager, Robert Crothers, said.

“In the very challenging dryland conditions of 2016/17 it has shown the ability to produce good grain size under stress, which is very important to the confectionery and corn flake end-users.”

Un Hwan Yum, senior managing director of Dong Il Grain, South Korea, also inspected P1888 at the Darling Downs site and was suitably impressed by the quality of the grain.

“Mr Yum is the largest importer of Australian gritting corn so it is great news for Australian corn producers that he is showing such a keen interest in the new hybrid,” Mr Crothers said.

Also in attendance was Andrew Cogswell from Lachlan Commodities, who specialise in supplying high quality grains to the international and domestic food industries.

Mr Cogswell was very impressed with P1888 and believes it will be well received by the snackfood industry.

“Considering the conditions last year, P1888 performed unbelievably on both dryland and irrigation. In both farming systems, it looks fantastic and has shown good disease tolerance. The performance on dryland was stellar given the pressure of the season and I believe this will be an excellent performing hybrid in Queensland,” he said.

“P1888 should be well received by snackfood manufacturers and initial trials have demonstrated this. We’ll be conducting more trials this year and I fully expect the hybrid to be approved for use by these manufacturers.”