NEW wheat varieties that can be sown deep to chase sub-soil moisture in years when there is a dry start to the season are being pursued by a research collaboration across the nation.

The Department of Agriculture and Food in Western Australia (DAFWA) is field testing a selection of novel lines developed by the CSIRO, with funding support from the Grains Research and Development Corporation. 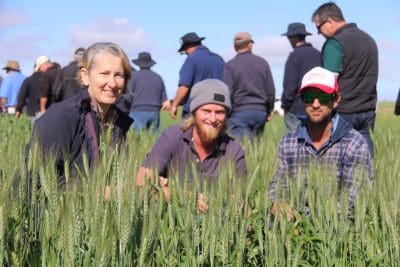 DAFWA senior research officer Bob French said the novel lines contained alternative dwarfing genes that had a longer coleoptile length – the pointed protective sheath that encases the emerging shoot as it grows from the seed to the soil surface.

“The introduction of the dwarfing genes Rht1 and Rht2 into Australian varieties gave us shorter cultivars, like Mace and Emu Rock, that are less prone to lodging and have a higher yield potential,” Dr French said.

“As a consequence of these genes, the coleoptile length of the varieties is shorter, 50 to 80 millimetres, which means they struggle to emerge when sown deeper than 80 mm.

“These lines developed by the CSIRO include alternative dwarfing genes, such as Rht8, found in some European cultivars that have shown to improve emergence when sown as deep as 140mm.”

The new lines have been back-crossed to an old tall variety Halberd, which has a long coleoptile length, so that differences in emergence can be attributed to the dwarfing genes.

A small set of lines were sown in two trials at Mullewa and Merredin, alongside Mace and Emu Rock to provide a comparison, at depths of 40mm, 80mm and 120mm.

“At the Mullewa site, the novel line H 80, which has the Rht8 gene, and Halberd sown at 120 millimetres recorded 30-40 per cent of the emergence of the shallow sowing, compared with only 10 per cent for Emu Rock and Mace,” he said.

“The results were similar at Merredin, where Halberd and H 80 sown at 120mm depth had 40-50 per cent of the emergence of the plants sown at 40mm, compared with 10-25pc with Emu Rock and Mace.”

Dr French said the results were promising for the development of future wheat varieties, which combined longer coleoptiles with high yield performance of modern semi-dwarf wheats.

“These varieties could provide growers with improved opportunities for early crop establishment by deeper sowing into moist sub-surface soil,” he said.

Meanwhile, the CSIRO work, led by Dr Greg Rebetzke, is also undertaking an agronomic evaluation of alternative dwarfing genes in a wider range of adapted genetic backgrounds, funded by GRDC at the department’s Managed Environment Facility at Merredin and other locations around Australia.

The trials will also be discussed at the department’s 102nd annual Merredin Research Facility field day on Wednesday, September 23.