THERE is big potential for a substantial grain production industry to emerge in the Gulf rivers region of far north Queensland where Australia’s latest irrigation project has been evolving for the past six years, according to Queensland AgForce’s grains president, Wayne Newton.

Under the North Queensland Irrigated Agriculture Strategy, the steady development of a large-scale irrigated agriculture industry has been driven by the release of new water entitlements, particularly in the Flinders and Gilbert river catchments. 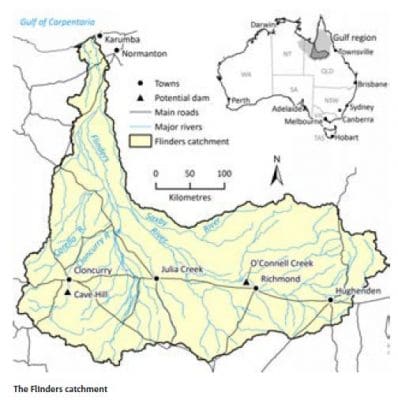 The Flinders River, at 1004 kilometres, is the longest river in Queensland with a catchment covering 109,000 square kilometres and an annual flow of 3.8 million megalitres (ML).

The Gilbert River is 610km long, has a catchment covering 46,810km2 and has the sixth-highest discharge of any river in Australia.

Visiting the area with members of the AgForce Grains Board, Mr Newton said while the project was focused on the development of irrigation infrastructure for a range of crops, including grains, it could also lead to the expansion of dryland grain production.

“Once you develop a backbone industry like the irrigation industry could be, the land is not limiting. There’s heaps of soil there. There is no reason you couldn’t develop a dryland industry alongside it,” he said.

Mr Newton said while local growers were already successfully growing winter and summer crops in the area, the scale of the scheme offered the opportunity for outside expertise and growers from other parts of Australia to become involved.

“We get a strong feeling a lot of the landholders up there might be keen to do a joint venture with growers with experience,” he said.

“They acknowledge their experience is very limited. They have the land, hopefully they will get the water, but they will be looking to import the expertise.

“Over the last six years there have been a number of southern farmers travel up and look at some of the potential.”

Mr Newton said the best outcome for the region would be if a significant number of smaller-scale operators became involved in the scheme.

“There is potential for a lot of medium sized developments spread across the region rather than one or two huge projects,” he said.

“The community benefit will be better from the smaller to medium projects because the people will look to spend their money and get their agronomic inputs from a local supplier rather than a big, mega corporate that will probably put it out to tender and deal with head office in Sydney or Melbourne.”

Mr Newton said much of the area had untapped potential for grain production with large tracts of soil suitable for cropping.

“There is a lot of good, farmable country there. In the Flinders River area there aren’t even vegetation issues because a lot of it is open plains. You could just about plant a crop there tomorrow,” he said.

Mr Newton said some of the challenges of the project included the current lack of local grain infrastructure and the distance to markets.

“There isn’t really any grain infrastructure there yet. But, although it is a chicken and egg situation, if there is demand things will happen,” he said.

“And some of the areas are only five to six hours from Townsville Port. There are plenty of southern Queensland growers who are that distance away from Brisbane Port. So it is not impossible.”

The freight distances to the port of Townsville are:

Before July 2012, there were 25,000 ML of water entitlements allocated to irrigation development in the Flinders River catchment through off-stream storages and direct irrigation from rivers and streams.

In April this year, the Department of Natural Resources and Mines (DNRM) released the Tender Assessment Report which showed:

AgForce Board director, Susan McDonnell, Board Director, AgForce Grains Board and Northern Regional Coordinator, GrainGrowers, said there was big potential for the livestock and cropping industries to expand in the area.

“Further development would offer options for cattle enterprises to value add to their livestock program and or producing high value cash crops such as chickpeas.  This area also has the advantage of close proximity to northern ports.

“When you consider cattle are currently being railed and trucked to Dinmore (at Ipswich) for slaughter the proposed abattoir at Hughenden makes a lot of sense.

“Issues with the live export market followed by extreme and long-lasting drought conditions have taken their toll on small rural towns in these areas.  The expansion of industry development in these areas would give a much-needed boost and help to keep people and services in the rural towns.”