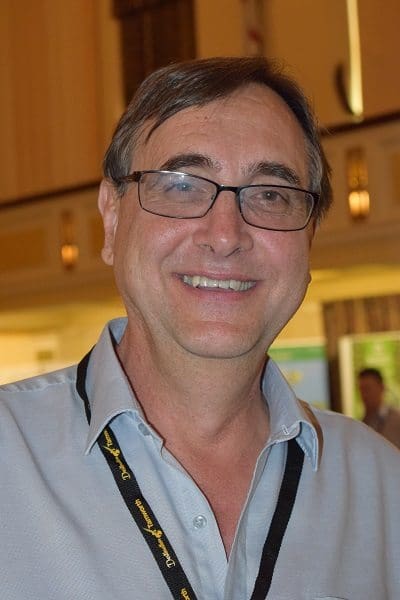 Speaking at the annual field day of the I.A. Watson Grains Research Centre at Narrabri in north-west NSW, centre director, professor Richard Trethowan, said a large component of the breeding work at the centre was on producing wheat, chickpeas and faba beans with improved yield stability and high temperature tolerance.

“We have been running heat tolerance trials for some years. What we realise is that for every degree rise in mean maximum temperature above the optimum for the season, there is a 250 to 400 kilogram/hectare loss in yield. It is really significant,” he said.

“We want yield potential plus heat tolerance. Among the Australian cultivars there is generally a degree of heat tolerance that has come from empirical selection in the environment.

“Breeders are making progress. There are lines like Mace that are one of the most heat-tolerant of all the Australian cultivars available.”

Professor Trethowan said to achieve the best results, heat-tolerant lines had to be used in conjunction with improved farming practices.

“Crops have to be sown in a timely way. If we are going to do something about the dips in yields in the difficult years, we have to sow crops on time,” he said.

“Weed control is very important. It is a water use issue.

University of Sydney post-doctoral fellow, Dr Rebecca Thistlethwaite, said sourcing genetic variation from lines that had done well in hot climates around the world, such as India, Mexico and Pakistan, underpinned the pre-breeding work into heat-tolerant lines at Narrabri.

Last year the breeders looked at 2600 lines and this year they are looking at 1600. 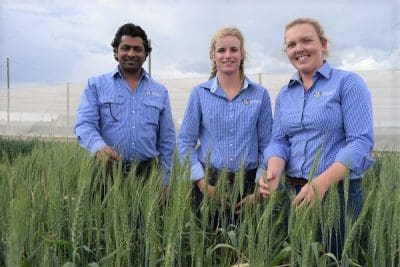 “We have found there is significant genetic diversity both within the Australian and international germplasm,” she said.

“There have been two particularly promising lines from Australian cultivars: EGA Gregory and Livingston were the two best.

“Those that did better than the commercial varieties were international germplasm, mainly from Mexico and India.”

Dr Thistlethwaite said another part of the project at Narrabri was developing phenotyping protocols and an idiotype for the best heat tolerance germplasm.

“In other words, what you would look for if you were trying to pick a heat-tolerant genotype,” she said.

“We had a three-tiered approach. We looked at times of sowing experiments in the field. Then we used heat chambers with an air conditioner attached. We treated the best varieties at anthesis and grain filling. We also looked at the smaller genotypes in the glasshouse.

PhD student, Smi Ullah, said for breeders to develop greater heat-tolerance in wheats the genetic base needed to be widened.

“In modern wheat, most of the time breeders are selecting genes on the best yield. Because of that, the genetic base of wheat has been narrowed. We need to broaden the genetic base,” he said. 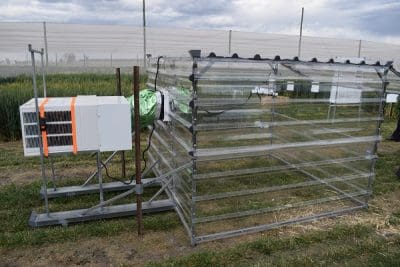 Wheat is grown in heat chamber to simulate hot conditions.

“Wild wheat relatives can contribute a lot. Emmer wheat, the first domesticated wheat, contains immense variation that can contribute to high temperature and drought. I created my lines using the genetics of emmer wheat.

“In my studies, stay-green capacity was one of the very significant factors because when a crop is under stress, genotypes with long stay-green ability can photosynthesise for very long periods and contribute to grain filling.”

Mr Ullah said part of the research work was to try to identify the mechanisms that could help scientists improve heat tolerance in crops.

“We have identified genotypes that are stable in expression under high temperature stress conditions and stable under normal conditions,” he said.