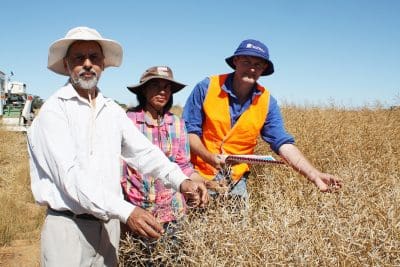 “Finding new sources of resistance, particularly resistance which is controlled by minor genes, is extremely important to the canola industry,” Dr Raman said.

“Blackleg disease can cause up to 80 per cent yield loss in canola – in Australia, France and Canada resistance has been broken down in some canola varieties due to the emergence of new races of the blackleg pathogen.

“Significantly for local canola growers, the study revealed new sources of blackleg resistance which were either resistant to the pathogen or had low levels of blackleg.”

Researchers used 18,804 DNA markers in a genome-wide association study to identify genes associated with both major and minor resistance in canola.

Several genes for resistance were mapped on the canola chromosome using molecular markers, which will assist the incorporation of a combination of genes to develop canola varieties with durable resistance to battle blackleg attack.

NSW DPI, in collaboration with Marcroft Grains Pathology and the Victorian DPI, has now validated the presence of new genes in a number of canola varieties.

The blackleg resistance research project was supported by the NSW, Victorian and Australian governments and Grains Research and Development Corporation.