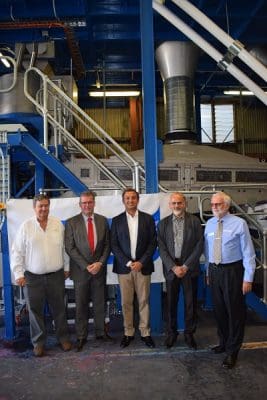 The new facility, which was built by Graintech Engineering in Ballarat, Victoria, replaces a plant that was nearly 17 seasons old.

Advanta Seeds managing director, Nick Gardner, said the upgrade of the plant improved the accuracy of chemical application and ensured the maximum benefit of seed treatment in protecting growing crops.

“The plant is capable of bringing new treatment options to the market in the future as the opportunity presents,” he said.

“Twenty years ago we hardly sold any treated seed. Now, 99 per cent of the seed we sell is treated and the technology and benefits of the seed treatment has improved and is now well understood by farmers.”

Mr Gardner said the main advantages of the new plant were:

Annually, it processes and transports between 7000 and 8000 tonnes of seed to markets in Australia and around the world.

The company’s seed is produced from Kununurra in the north of Western Australia to the Murrumbidgee Irrigation Area and Tasmania in the south. The majority of that seed comes to Toowoomba for quality control, processing, treatment and packaging.