Once considered a minor pest, in recent years RGB has risen to the top of the list for resistance to phosphine fumigation – the most common technique used to control insect pests in silos and bunkers. 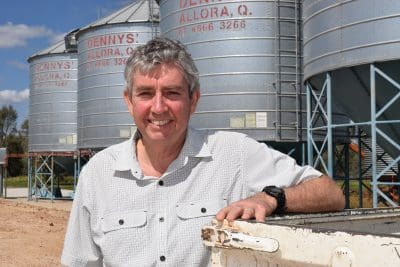 Queensland Department of Agriculture and Fisheries post-harvest grain protection team principal entomologist, Dr Pat Collins, Brisbane, told growers at a field day near Mungindi in southern Queensland yesterday there was already a level of resistance to fumigation in all the main pests in cereal grains, particularly the lesser grain borer.

But there had been a far more dramatic spike in the build up of resistance levels in RGB.

“In the last five years we have started to see a new, very high resistance in an insect called the Rusty Grain Beetle,” he said.

“It was really only a minor pest before and people didn’t take much notice of it. But now it has developed very strong resistance it is starting to survive fumigation.”

Dr Collins said researchers were concerned about the impact of RGB, particularly as it was showing resistance levels many times more than what had been found in other grain pests.

“To give an example of the level of resistance now being found in the Rusty Grain Beetle, with the lesser grain borer we only needed five days’ gas fumigation and a couple of days to vent to control it. With the RGB we are looking at something like 28 days, so there is a big difference,” he said. 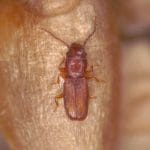 The Rusty Grain Beetle is about 2mm long with long antennae.

“The thing about resistance to phosphine is it doesn’t make the insects immune. You can swamp the resistance by extending the fumigation time and holding the gas longer, or increasing the concentrations. But it is more practical just to extend the fumigation,” he said.

“Our recommendation is you use a sealed silo and extend the time of fumigation.”

While RGB has developed resistance to phosphine gas fumigation, Dr Collins said it was not resistant to grain protectants, so growers who were able to pre-treat grain with a grain protectant could still achieve effective control.

RGB is a small, fast moving beetle about 2mm long with long antennae. Like the red flour beetle, it feeds on broken grain. Because of mechanical harvesting there are always plenty of chipped seeds in any load of grain for it to survive and reproduce. It does well in the heat and moisture of hot grain.