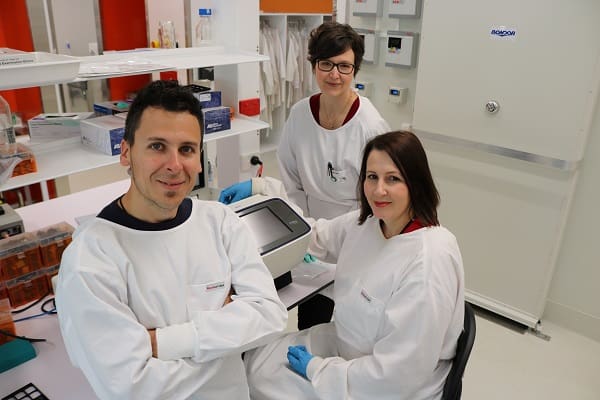 AUSTRALIAN researchers have a new weapon in the fight against fungicide resistance in grain crops, with confirmation that a specially adapted approach to detection, involving cancer technology, is effective for this purpose.

Researchers at the Centre for Crop and Disease Management (CCDM) – a national research centre co-supported by Curtin University and the Grains Research and Development Corporation (GRDC) – have used digital Polymerase Chain Reaction (dPCR) technology, combined with ‘baiting’ trials, to develop an advanced early warning system that researchers can use to better detect fungicide resistance.

Baiting trials are field trials that can optimise the capture of fungal pathogens that show fungicide resistance.

The adapted and fine-tuned dPCR technology will enable earlier, more targeted information to be delivered to growers so they can move more quickly to counteract any potential yield losses.

It has also expanded knowledge about the extent of fungicide resistance in the damaging disease barley powdery mildew, and shown that the disease is more widespread than previously thought.

In 2016, CCDM researcher Belinda Cox adapted the dPCR technology, which is used extensively in cancer detection as a way of finding genetic mutations in cells, for use in detecting fungicide resistance.

Using this tool, researchers uncovered one mutation (S509T) in the CYP51 gene, associated with increased resistance to demethylase inhibitor (DMI) fungicides, in barley powdery mildew from samples collected across Australia.

They also documented, for the first time, the presence of DMI resistance in barley powdery mildew in areas outside of Western Australia.

Further development of the dPCR technique, tied in with the baiting trials, has allowed researchers to detect the resistance at a much lower frequency than before and in most cases even before it is reported by growers.

According to CCDM’s Fungicide Resistance Group leader Fran Lopez-Ruiz, dPCR works by allowing researchers to collect multiple samples from a crop, pool them and then analyse fungal DNA to look for resistance mutations.

“Early detection is an essential step in delivering better tools for the management of fungicide resistance, and the use of this technology, in conjunction with baiting field trials, has allowed us to not only detect resistance quickly and more effectively, but to quantify the level of resistance,” Dr Lopez-Ruiz said.

Powdery mildew in barley – caused by the pathogen Blumeria graminis f.sp. hordei – is a major economic issue for growers, estimated to cause up to $33 million a year in crop losses in Australia.

CCDM researcher Katherine Zulak said the research team was the first to use the high throughput dPCR technology to look specifically for fungicide resistance in the field, and the accuracy and speed of the process had exceeded their expectations.

“We found the technique to be very sensitive and accurate, identifying the presence of a mutation in the CYP51 gene down to 0.2 per cent of the fungal population,” she said.

“Picking up DNA mutations at that level would have been much slower and more difficult (or even impossible) to detect using more traditional laboratory methods.

“Our research has demonstrated this test works and we can now continue to push ahead with this technique across our fungicide resistance research. Ultimately, this will lead to improved fungicide practices and assist growers to consider what integrated management systems they should put in place to better protect their crops against crop disease.”

CCDM co-director, Mark Gibberd, said fungicide resistance was one of the key priorities for research within the CCDM.

“Under the leadership of Dr Lopez, Dr Zulak and Ms Cox have developed a tool that provides the industry with a critical capability – this is an important step as the tool not only detects the presence of the key mutations, but determines how prevalent the mutation is when the frequency of the resistance is still very low within the pathogen populations,” Professor Gibberd said.

Dr Lopez-Ruiz said the next step was to expand activities to further investigate the scope of the technology and to develop a more detailed picture of the prevalence of barley powdery mildew and other fungicide-resistant diseases across Australia.

CCDM researchers use samples to assist with a range of crop disease research. If growers suspect that fungicides are not effective on their crops, they can contact the CCDM’s fungicide resistance team at [email protected]

A paper with the details of the dPCR research has been published in the prestigious science journal Frontiers in Microbiology and can be found at https://www.frontiersin.org/articles/10.3389/fmicb.2018.00706/full