A NEW wheat variety specifically adapted to tropical and sub-tropical environments is set to offer growers in the non-traditional wheat-growing regions of far-northern Australia a high-yielding, disease-resistant cereal option.

The new line, Buchanan, will be commercialised by north west NSW-based seed and grain company, Austgrains. 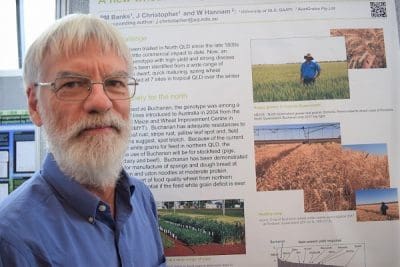 It was selected by Associate Professor, Phillip Banks, whose work focussed on identifying a variety that would not only perform in traditional wheat-growing areas, but also be a viable option for the tropical environments of northern Australia, such as north Queensland.

“People have been trialling wheat in north Queensland since the late 1800s. But that has had no impact because the varieties have tended to be too long a season for the environment there,” he said.

“I trialled a range of short season, day-length-insensitive material and found it quite feasible to grow wheat in the north Queensland environment.”

Associate Professor Banks ran trials over a wide area of the region from Longreach through to Richmond, and along the Flinders Highway towards the east coast.

He had a trial site at Pentland 100 kilometres west of Charters Towers; trials in the Burdekin at Home Hill; trials on the Atherton Tableland; and trials at Mackay.

“We have proved it is feasible to grow wheat up there. But the really important factor is you just don’t take wheat from central or southern Queensland and try to make a crop out of it in north Queensland. You need to look at a wider range of wheat genotypes,” he said.

“The ones I found the best were from the International Wheat and Maize Improvement Centre (CIMMYT) in Mexico. They are the ones at the top of the list. Varieties from southern Queensland such as Baxter and Hartog are a lot further down the yield ranking.”

Speaking at the TropAg 2017 conference in Brisbane, Associate Professor Banks said Buchanan was an “outstanding genotype” selected because it had the key characteristics needed to perform in a tropical environment. “It is high yielding and appears to have resistance to the diseases of most importance, such as the three rusts (stripe, stem, leaf) and yellow spot. But we also found it is resistant to spot blotch which is a more tropical disease we don’t see so often in the traditional wheat belt,” he said.

“So, having resistance to the extra disease, in addition to the rusts and yellow spot, gives it a stability to production, instead of losing out to disease in a wet year when you should be getting your highest yield.”

Associate Professor Banks said initially at least, Buchanan would be grown as a feed grain supplying the extensive livestock industry in north Queensland.

“There is a need for something like this in north Queensland as a grain that can dovetail into the animal feed industries,” he said.

But he said it was also suitable for manufacturing sponge and dough bread and udon noodles, giving it potential to be grown as an export quality wheat for northern Australia.

Austgrains managing director, Warren Hannam, said in addition to its tropical credentials, Buchanan had proven very competitive in the traditional wheat-growing areas east of the Newell Highway in NSW and Queensland, and at sites in Western Australia.

Mr Hannam said Austgrains was commercialising Buchanan by way of closed loop and would purchase on grade against contracts where applicable.

It was currently protected by interim Plant Breeder’s Rights (PBR) and a possible classification application might commence in 2017/18.

He said Austgrains had exported APH Buchanan to West Europe and it had been, and continued to be, evaluated in North Asia.

“It has been comprehensively evaluated in Asia and here in Australia for baking and noodle quality and is competitive with DNS (Dark Northern Spring) and CWRS (Canadian Western Red Spring). It has excellent functional properties desired by Asian baking at high protein APH 1 and APH2 and noodle at lower protein APW – AH.

“Introducing speciality wheat into Asia requires patience and perseverance as US and Canadian wheat enjoy dominance and preference. In the case of US wheat, it is strongly assisted by extensive and continual promotion by US Wheat Associates and a significant budget.”

Mr Hannam said the new wheat’s name, Buchanan, was chosen in keeping with Austgrains’ tradition of naming its wheats after pioneering pastoralists, such as Kidman.

“Buchanan was named after the great pioneering drover of the 19th Century, Nat Buchanan. Nat Buchanan is buried at Walcha (in northern NSW) and his just-as-famous brother William held land south west of Moree, Narrabri, Coonamble (NSW) and other locations including Wave Hill (NT). They were true pioneering pastoralists,” he said.

“Nat opened the famous Murranji Track to the Kimberleys in Western Australia, taking 4000 head of cattle to Ord River Station in 1883.”