No GMO crops would cause hike in greenhouse gas emissions

A GLOBAL ban on genetically modified (GMO) crops would raise food prices and add the equivalent of nearly a billion tons of carbon dioxide to the atmosphere, a study by researchers from Purdue University in the United States shows. 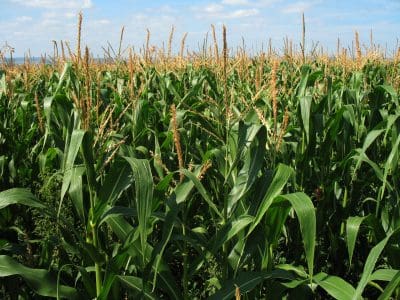 Replacing GMO corn, soybeans and cotton with conventionally bred varieties worldwide would cause a 0.27 to 2.2 per cent increase in food costs,

Using a model to assess the economic and environmental value of GMO crops, agricultural economists found that replacing GMO corn, soybeans and cotton with conventionally bred varieties worldwide would cause a 0.27 to 2.2 per cent increase in food costs, depending on the region, with poorer countries hit hardest.

According to the study, published in the Journal of Environmental Protection, a ban on GMOs would also trigger negative environmental consequences: the conversion of pastures and forests to cropland – to compensate for conventional crops’ lower productivity – would release substantial amounts of stored carbon to the atmosphere.

Conversely, if countries that already plant GMOs expanded their use of genetically modified crops to match the rate of GMO planting in the US, global greenhouse gas emissions would fall by the equivalent of 0.2 billion tons of carbon dioxide and would allow 0.8 million hectares of cropland to return to forests and pastures.

“Some of the same groups that want to reduce greenhouse gas emissions also want to ban GMOs. But you can’t have it both ways,” said Wally Tyner, the James and Lois Ackerman Professor of Agricultural Economics.

“Planting GMO crops is an effective way for agriculture to lower its carbon footprint.”

GMOs have been a source of contention in the United States and abroad, as some believe genetically modified crops pose potential risks to human health and the environment.

Three US regulatory agencies – the Department of Agriculture, the Food and Drug Administration and the Environmental Protection Agency – have deemed GMO foods safe to eat, and the US is the global leader in planting GMO crops and developing agricultural biotechnology.

But in many European and Asian countries, consumer and economic concerns have led to strict regulations on GMO crops, with partial or full bans on their cultivation.

Professor Tyner and fellow researchers Farzad Taheripour, research associate professor of agricultural economics, and then-master’s student Harry Mahaffey used an extension of the Purdue-developed Global Trade Analysis Project (GTAP-BIO) model to investigate two hypothetical scenarios: “What economic and environmental effects would a global ban on GMO corn, soybeans and cotton have?” and “What would be the additional impact if global GMO adoption caught up to the U.S. and then a ban were implemented?”

The model is set to 2011 crop prices, yields and growing conditions and encompasses the ripple effects of how a change in one sector impacts other sectors.

GTAP-BIO predicted a modest and region-specific rise in overall food costs under a global GMO ban, a result of the lower productivity of non-GMO crops.

Prof Tyner said people in poorer regions would be most burdened by the price increase, as they spend about 70pc of their income on food, compared with about 10pc in the US.

As a result, the US, despite being the biggest planter of GMO crops, would profit under a GMO ban because of its strength as a crop producer and exporter.

China, a major crop importer, would suffer a welfare loss – a measure of economic wellbeing – of $3.63 billion.

“The US is the largest agricultural exporter, so if the price of agricultural products goes up, we benefit,” Prof Tyner said.

Banning GMO crops would also lead to an increase in global cropland of 3.1 million hectares (about 7.7 million acres), as land would be cleared to compensate for the lower yields of conventional crops. Converting forests and pastures into farmland is an environmentally-costly process that releases carbon stored in plants and soil, and this expansion of cropland would add the equivalent of 0.92 billion tons of carbon dioxide to the atmosphere.

Prof Tyner said the economic consequences of a GMO ban came as no surprise to him and his co-authors, but the toll such a ban would have on the environment was an eye-opener – and a component that is notably missing from global discussion of GMOs.

“It’s quite fine for people to be concerned about GMOs – there’s no scientific basis to those concerns, but that’s their right,” he said.

“But the adverse impact on greenhouse gases without GMOs is something that is not widely known. It is important that this element enter into the public conversation.”