No respite from costly fertiliser seen in 2023: Rabobank

Preparing to spread urea on canola east of Walgett in north-west NSW in late July. Photo: Will Ricardo

AUSTRALIAN growers are likely to again face above-average fertiliser costs in 2023, according to a report released this week by Rabobank.

Entitled Fertilizer Outlook: Is History Repeating Itself? the report says a recovery in global fertiliser consumption is possible in some regions in 2023, with prices lowering, and commodity prices at historically good levels.

“In addition to this, domestic freight and logistics constraints are unlikely to be unwound into 2023, meaning Australian farmers will again be facing well-above average costs for crop nutrients in 2023.”

However, Mr Pistoia said, local fertiliser demand should be strong.

“With the country on track for a third consecutive year of well-above-average crop production, the majority of farmers may have favourable cash flow as they determine their fertiliser needs for 2023.

“There should also be the need to replenish soil nutrients, given strategies that have been in place to manage high fertiliser costs this past year.”

“These factors, on balance, support a reasonably buoyant fertiliser market outlook and a continuation of purchasing for planting needs as harvest advances and farmers are able to make the transition to the 2023 season.”

Rabobank’s Fertiliser Affordability Index tracks the relative price of a basket agricultural commodities in comparison with a basket of fertilisers, and it has shown current price trends and volatility are in line with an historic pattern of peaking cycles. 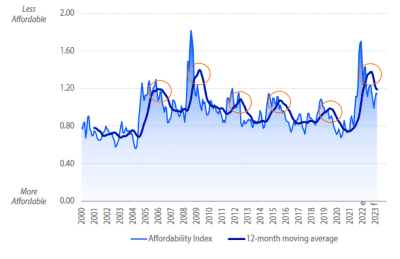 The report said if history was to be believed, and trends following the 2008 Global Financial Crisis repeated, then global fertiliser prices should ease in coming months after the upset of the Russia-Ukraine war.

“For the next three months, the index will continue to trend downward, but remain above normal.”

“The key point of attention is on nitrogen products, as the natural-gas crisis in Europe has the potential to make urea and ammonia more expensive and, therefore, to keep the index at a high level.”

Offsetting that is Rabobank’s expectation that the two-year run of historically high grain and oilseed prices will continue globally for at least another one to two years.

“It will take several years before these factors are rectified and prices decrease from their current levels.”

On top of this has been the impact of Russia’s invasion of Ukraine, which has tightened global supplies of corn and wheat particularly.

“Analysis shows that producers’ margins will be lower in the 2023 growing season than in the past two years, but margins will still be positive.

“With strong working capital and positive margins, producers will make minimum, if any, cuts to inputs.

“Their objective is to maximise yields, and that is not accomplished by cutting back inputs, particularly fertilisers.”

The report said the outlook for nitrogen-based fertiliser pricing was more volatile than that for phosphates and potash due to its connection to energy markets, which surged in response to the Russian invasion. 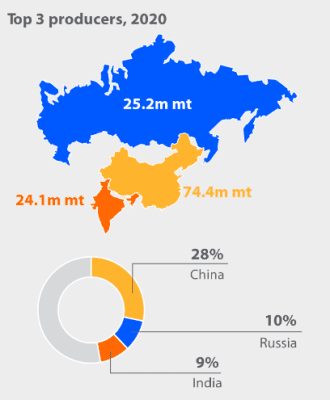 “Oil and natural gas prices soared, as did the prices of urea and ammonia.

“Since then, prices have decreased, but they remain very volatile.”

Rabobank’s commentary said the 2022 annualised volatility of urea prices up to mid-October was above 60pc, three times more than the five-year average.

“Given the current scenario, we should not expect volatility to decrease anytime soon.”

The report said Europe’s ongoing natural-gas crisis was affecting the region’s economy, as well as operations of factories, including those making fertiliser.

Some numbers in the market indicate that nearly 50pc of ammonia factories have shut down or reduced their production rates, and the curtailment of urea production is even more aggressive.

The report said EU-27 nations consume more than 12 million tonnes of urea annually, or 7pc of global consumption, while its share of the global ammonia market was around 8.5pc.

“Key to understanding the possible impacts is the fact that the region is a net import of urea, importing nearly 25pc of its annual consumption.”