Despite significant, untimely rain throughout October and early November, most growers are still preparing to harvest crops in the coming weeks, much later than usual.

However, logistical issues such as road closures, access to storage, washouts, wet paddocks and damaged infrastructure are expected to make this harvest a difficult one.

AMPS agronomist Tony Lockrey said in the Moree district, growers with good drainage or sloped country would still be able to harvest 90 per cent of their crops this harvest, despite the significant amount of rain during October.

“Growers east of the Newell Highway will still be able to harvest most of their crop but they’ll be tip-toeing through it,” Mr Lockrey said.

“There have been delays to getting started and also logistical issues of roads being washed out and fences falling down.

“There’s a lot of infrastructure that will need to be fixed.

“Some growers have been able to get started on their canola and faba beans and have recorded some good yields.”

Areas on the western side of the highway haven’t fared as well, with Mr Lockrey saying about 40pc of crops wouldn’t be harvestable.

“That’s regardless of whether crops were ripe or not ripe yet. Flood waters have caused crops to lie down making it extremely difficult to recover at any stage.”

Outlook Ag director Greg Rummery said the Walgett region has been swamped, with some crops completely inundated from flood water and excessive rain.

“It’s been a very wet spring, defined by the frequency of rainfall events and the substantial amount of rain these events have produced,” Mr Rummery said.

“On top of that, the Walgett Shire has experienced extensive river flooding, with some crops completely under water.”

“I’m hopeful growers will be able to salvage something from areas that haven’t been entirely inundated with water and crops aren’t fully submerged, but we won’t know until conditions allow, which could be a 4-6 week wait.

“A lot of the region’s harvest will take place in the middle of December to early January, which is extremely late.”

Mr Rummery said on a positive note, some farms north and west of Walgett that have not been impacted by floodwaters have been able to commence harvest.

“We’ve heard some reports of phenomenal grain yields, which just shows how good the season was leading up to the floods.

“There have been some issues with quality reported though, with low protein, high screenings and weather-impacted crops being shot and sprung.

“Some growers have also been able to direct head their canola and have been producing some good yields from that.”

Baan Baa-based growers and contractors Jack and Shaine Maunder have been heavily impacted by flood waters and ongoing rain, with the weather causing a logistical nightmare for their business, which consists of two headers and a spray rig.

“We were fairly lucky in terms of crop loss in that the bulk of the rain fell when the crops were still green – there will be patches that won’t be harvestable, but it could have been a lot worse if the crops were more developed.

“Our contracting business has certainly felt the impacts of the weather though.

“We’ve only just gotten our headers on to paddocks in the last week when usually we would have been harvesting for nearly a month.

“At this stage in the season, we would have been harvesting crops in Walgett and making our way back to our district.

“Instead, we haven’t left our area at all, meaning we’re weeks behind and will most likely lose some of what has been our more consistent work because they’ve lost crops, or are heavily delayed in starting.

“There’s been a lot of sitting on our hands over the past few weeks; sending our staff out to sit in headers, waiting for the moisture to go down or trying to get around road closures and washouts to get to farms, but we’re grateful we’ve at least been able to make a start.” 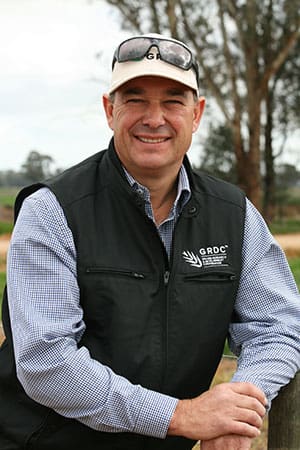 Mr Bolte said growers across his region have been battling the wet conditions for months and the winter-cropping area was down compared to usual due to ongoing rain at the start of the year.

Currently, crops across central and southern NSW and into Victoria are being impacted by the ongoing wet conditions and the significant logistical issues they’re causing.

“The eastern side of West Wyalong, including my property, has been completely inundated with water,” Mr Bolte said.

“We had another 90mm of rain on [Sunday] which has just been the icing on the cake.

“It’s a case of not knowing what we’ll be able to harvest until the water goes away.

“We’ll have some crops, like standing canola, that we’ll be able to take off once we’re able to get on the ground but trafficability is a huge issue for everyone at the moment.

“It’s looking like we’ll only be able to harvest about 40pc of what we put in.”

Mr Bolte said there are crops ready for harvest on the western side of West Wyalong, but a lot of growers have not been able to get a start with the unusually cool conditions and high moisture in crops.

“There will be some growers who will have a good year if they’re able to take their crops off.

“Commodity prices are promising and there are some terrific looking crops around but they need to be able to get on paddocks to benefit from that.”

Toowoomba-based MCA Ag director Paul Castor said people were harvesting across the Western Downs and most were having a good run, producing promising yields.

Mr Castor said a lot of growers were still waiting to get on country, especially in southern parts of the region near Goondiwindi, but they will get started when conditions allow.

“We expect there will be some quality issues and there’s been talk of falling numbers but overall, things are looking promising,” Mr Castor said.