NSW winter crop heads into spring with its tail up DESPITE a wet winter that has created waterlogging issues and denied paddock access for spraying and fertiliser applications, farmers in New South Wales are on track to produce an above average winter crop this year.

Rain across much of the NSW cropping zone earlier this week exacerbated some of the waterlogging problems that have limited crop development this wet winter, but there are many areas that had a fortnight of drying weather and rising temperatures beforehand that spurred on crop growth.

In the north west, Nutrien Ag Solutions agronomist at Moree, Garry Onus, said some areas were still wet underfoot and crops were a mixed bag, but there was “more good than bad”.

“Farmers would much rather be in this situation than have a drought,” he said.

“The crops are all over the shop. Some are terrible from waterlogging and others are going to be reasonable crops.”

“Faba beans are magnificent this year after the big problem with virus last year. Last year was the worst I have ever seen it. They link it all back to an early flush of clover and medics. The ones in this year look very good,” he said.

“Chickpeas are going well. They are getting to the business end now. They are not far off flowering.

“I had a grower who has wheat and chickpeas that have suffered from too much water and he said he’d rather have waterlogged chickpeas than waterlogged wheat. If chickpeas survive the water they get on and do their job because they fix their own nitrogen. But you can never get wheat to recover once it has struggled for nitrogen.”

Mr Onus said crops in the flatter country to the west where flooding occurred earlier in the year were doing particularly well.

“As you go west growers had to follow the ‘tide’ out from the floodwater, so they have three different planting dates in the one paddock. But those crops are looking good because they had to wait for the soil to dry out after the flood and they haven’t had as much in-crop rain,” he said.

“Back to the east, anywhere that doesn’t drain well has had the waterlogging effect.”

On the Liverpool Plains, agronomist, Pete McKenzie, said despite falls of 14 to 20 millimetres through the week, the country had been drying out enough for producers to get on their paddocks to apply nitrogen and the crops were looking okay. 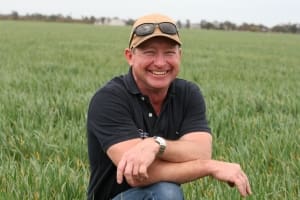 “Cereals look good. They are behind where they were this time last year because it has been a bit cold and wet. There are more waterlogging patches this year than the previous year. But on the whole they don’t look too bad,” he said.

“They were behind mainly because the solar radiation levels were the lowest they’ve been in 30 or 40 years. They are starting to grow now with warmer weather.

Mr McKenzie said some of the later-sown crops of chickpeas were only just emerging now.

“There were people planting winter crop up until August 10. Those crops are just getting out of the ground. There is a big spread on the crop this year as farmers were getting back into a semi-normal rotation because of the amount of summer crop,” he said.

“Everyone is preparing summer crop country now, which will start in a month.”

In the Central West, IMAC agronomist at Forbes, Cameron Corke, said much of the area had been affected by wet conditions and was just starting to dry out when another 15 to 35 millimetres of rain fell earlier this week.

“The crops were starting to move. They are in the reproductive phase at the moment with canola flowering,” he said.

“The late-sown crops are the ones that have struggled. It got too wet on them.

“There is a vast contrast between the early-sown crops that got going and, even though it got wet, they have their roots down and been able to utilise the excess moisture better than the late-sown crops.

“The late-sown crops are struggling whereas the early-sown crops are doing quite well if growers have been able to get nitrogen onto them and get the weeds cleaned up.

“In the last two weeks farmers have been able to get on and clean a lot of the country up and get a lot more nitrogen out. But, there are certain paddocks that are just way too wet. You can’t do anything about it, you just have to run with it.

On the south west slopes, Riverina Coop agronomist at Junee, Angus Knight, said crops had rallied with the onset of more sunlight and warmer temperatures after an exceptionally wet winter.

“It has rained every three days through the centre of it. That has limited plant growth, particularly where it got too wet,” he said.

“We had 10 to 15mm this week which has wet the profile again. We will be going into spring with the best part of a full profile. It’s good to have that confidence behind us.”

Mr Knight said canola was from 20 to 60 per cent in flower, while grazing canola was still a way off flowering.

While some cereals were just seeing flag leaf emergence, most hadn’t reach flag leaf stage yet.

The Bureau of Meteorology is predicting a wet, warm spring for eastern Australia, with NSW set to be in the thick of the above-average rains.

The Bureau says spring is likely to bring above average rainfall for the east of the country as well as cooler days and warmer nights.

The current outlook remains dry for Western Australia and nights will be cooler than average for the south of the state, with spring days also tipped to be warmer for the Top End and Tasmania.

Bureau climatologist Andrew Watkins said predictions for a wetter and warmer spring come after a particularly wet and warm winter.

“Nationally, we’ve seen the wettest winter since 2016,” he said.

“Australia’s average winter temperature is also expected to be one of the 10 warmest on record, particularly in the tropical north.” Dr Watkins said the main reason behind the Bureau’s prediction for a wetter than average spring was a climate driver called the Indian Ocean Dipole (IOD).

“We’ve currently got a negative IOD – a phenomenon which typically brings an increased chance of rainfall to southern and eastern Australia,” he said.

“This negative IOD is expected to persist throughout spring but is currently weaker than the last negative IOD event we saw in 2016, which brought Australia’s wettest May-October period on record.”

Another relevant climate driver, the El Niño-Southern Oscillation (or ENSO), is likely to remain neutral with no declaration of a La Niña event expected in the coming months.