THE NORTHERN Territory cotton industry is optimistic about the current season with the expected 2023-24 cotton area tipped to be a record at more than 10,000 hectares ahead of the anticipated July opening of its game-changing gin.

However, the New Year hasn’t been all smooth sailing for the burgeoning industry, with new controversy involving allegations of illegal land clearing, and the release of an Australian Institute report questioning the economic benefits of the crop in the NT.

Three NT stations were the subject of an ABC 7.30 report into alleged illegal land clearing for cotton crops, with the properties currently under investigation by the NT Government.

Following the ABC broadcast, the Federal Department of Climate Change, Energy, the Environment and Water (DCCEEW) announced it would investigate the allegations.

“Land clearing in the Northern Territory is being investigated by the department’s Environment Compliance Branch. 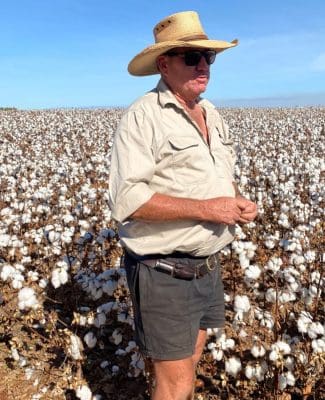 “The department is working with the Northern Territory Government to determine whether these activities are compliant with the EPBC Act, as well as the relevant Territory legislation.”

NT Farmers chief executive Paul Burke said the organisation, which has been supportive of the cotton industry from the beginning, has always backed a “robust regulatory process”.

“I think 99pc of growers do the right thing and are quite conservative in their approach, but we need to make sure that when things don’t go the way they are supposed to go that there are consequences,” Mr Burke said.

“If people have been found to do the wrong thing…then we abide by the umpires ruling.”

Northern Cotton Growers Association president Bruce Connolly said less than 1pc of the NT was currently cleared for any use, not just for cotton growing, other crops or grazing.

He said people needed to put this into perspective, given the NT covers approximately 133 million hectares.

With the fifth cotton season under way, Mr Burke said industry pioneers were in a unique position where they, alongside the NT Government, can shape it to become “world’s best practice”.

He said the reliable, monsoon rainfall pattern experienced in NT meant about 90-95pc of growers were dryland rather than irrigated.

He said this kind of system was probably more sustainable than many other approaches.

“We are seeing that the growers’…level of knowledge and experience and ability to adapt their practices to climatic conditions and crop needs has become much more sophisticated.

“If you extrapolate that out into the next decade, you will see massive improvements that will ultimately end up with better crop yield.” Mr Burke also responded to issues raised by the Australian Institute last week which questioned the supposed employment benefits the cotton industry would bring to NT.

“You would be hard pressed to find an industry with less employment potential for the Territory than cotton,” the Australian Institute research director Rod Campbell said.

He said this would include increased employment for mechanics and machinery suppliers and agronomists as well as in the cattle industry which will benefit from improved accessibility of cottonseed.

“What those flow-on effects are we don’t know yet and we haven’t done the analysis of what that would be across the whole supply chain, but it would be significant.

“One example of one of our larger properties previously had 45 staff and now have 51 in their cropping program.” The Katherine gin is anticipated to open in July or August this year. Photo: Entegra Sheds

Even more employment opportunities are on the cards when the state’s first gin opens in July or August.

The project will bring immense benefits to the industry by removing the need for growers to truck bales thousands of kilometres to the Darling Downs in Queensland for ginning.

It is the brainchild of the Western Australia Northern Territory (WANT) Cotton organisation and is being built on Tarwoo Station, 35km north of Katherine.

Mr Connolly said the gin “will be a big deal” for cotton growers in the NT.

He said one of the stations have held back 100 modules of cotton from last year to use in order to commission the gin.

It is also anticipated the gin will be ready to process cotton from the 2022-23 season.

Grain Central understands cotton ginner and merchant Louis Dreyfus Company is in talks with the gin owners and it is expected the company will be assisting the operation in some way.

Ahead of the NT’s first gin coming on line, the industry is also believed to have planted its first cotton crop over 10,000ha.

Mr Connolly said the growth from 8000ha in 2021-22 showed a continued, yet sustainable, rise in plantings and grower interest in the crop.

He said this was the same for many other broadacre and forage crops, which would be grown in rotation with cotton.

“There is continued interest in developing the north for agriculture…not just cotton, because it will be grown in a rotation with something else.”

NT cotton planting usually commences in early to mid-December and is ideally completed in January.

Mr Connolly said this season, wet weather delayed planting for most growers and many crops went in later in the optimum planting window.

“The northern farmers have had probably higher-than-average rainfall to date for this wet season, which has gone well for early plantings in some regions and it has gone badly in other regions,” Mr Connolly said.

“As we stand now, it is my understanding that everyone has got their cotton in, and it is either up and away or will be in the next few days.”

He said more “monsoon-like events” are predicted in the coming weeks, but with temperatures remaining hot and humid, the crop should withstand the conditions.

Mr Connolly said the future of the crop is still reliant on decent March and April falls.

“We can reasonably expect good January-February rain…and if we get a solid March-April rain, we will get a high-yielding, good set up crop.”

Cotton Australia is currently predicting the Australian 2022-23 cotton crop to be more than 5Mb, and ABARES forecasts the national cotton area at 490,000ha.