A SECOND year of oat trials were planted in Western Australia recently to confirm preliminary research findings of variability in the tolerance among varieties to the fungal disease Fusarium crown rot. 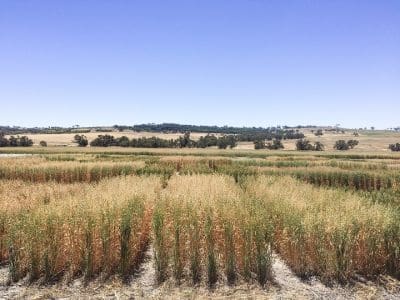 Preliminary 2016 trial results from a trial site at Pingelly (pictured) and another at Merredin suggest there is variability in the tolerance among varieties to the fungal disease Fusarium crown rot. The Grains Flagship research will continue this year.

The research is part of a Grains Flagship project by the Western Australian Department of Agriculture and Food (DAFWA) to develop susceptibility ratings for oat varieties.

Crown rot costs Australian wheat and barley growers an estimated $97 million per annum, however, relatively little is known about its impact on oats.

DAFWA research officer Daniel Hüberli said further trials were required to confirm the impact of the disease on different varieties under different conditions.

“Trials in 2016 at a low rainfall site near Merredin and a high rainfall location near Pingelly showed some varieties seemed to be affected by crown rot more than others, with yield losses of between five and eight per cent,” Dr Hüberli said.

“The trials have been replicated this year at Merredin and a higher rainfall site at Muresk, near Northam.

“While it is too early to confirm which oat varieties are more susceptible to crown rot, it is appears oats are generally more tolerant to the disease than wheat.”

Six varieties are being tested in each trial, including Bannister, Carrolup, Durack, Kojonup, Mitika, Williams and Yallara, alongside two wheat varieties – one with high and another with low resistance to crown rot.

The trials are inoculated with crown rot and run under typical paddock strategies.

Dr Huberli said the 2016 oat trials at Merredin and Pingelly would be over-sown this year with wheat to ascertain whether there had been an increase or decrease in the amount of crown rot pathogen generated by the different oat varieties. 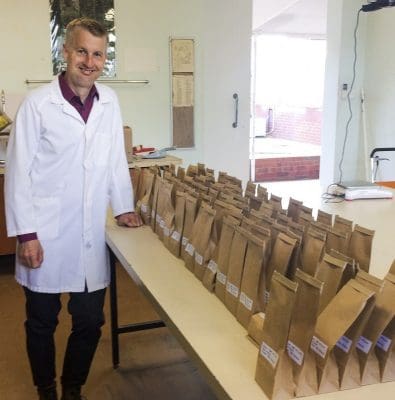 DAFWA research officer Dr Daniel Hüberli with packets of oat seeds that are being evaluated for the presence of crown rot, as part of a Grains Flagship trial develop variety susceptibility ratings for the fungal disease.

“These over-sown trials will also examine whether there is any added benefit from sowing oats to reduce the level of the disease in the soil and its impact on the following year’s wheat crop,” he said.

The research will include a survey of the oat National Variety trials so trial findings can be extended to other regions.

The two-year trial is part of the department’s Boosting Grains Research and Development project, supported by Royalties for Regions.

It complements the department’s work with the National Crown Rot project, funded by the Grains Research and Development Corporation.

The results are intended to support future Variety Sowing Guides for oats and to assist the development of varieties with improved disease resistance.