OAT growers in Western Australia are waiting for season-break rains to move into planting in earnest on a potential crop that has left pundits second-guessing what the likely oat area will be this year. 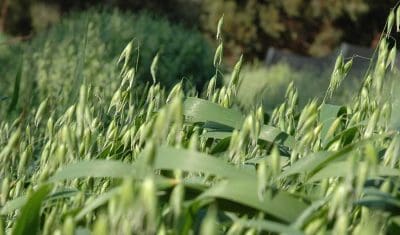 While some dry sowing has been underway, particularly in the southern areas, the bulk of the winter crop seeding in WA is yet to get going.

But some analysts think that might be over-optimistic, given that barley is the ‘flavour of the month’ with the Chinese taking a keen interest in Australian barley and a significant rise in price since the same time last year. Barley is likely to chew into the prospective area for oats and wheat.

Grain Industry Association of Western Australia (GIWA) Oats Council chair, Ashley Wiese, said he was a bit surprised about a forecast rise in oat area, and thought it was more likely to hold at traditional levels of production.

“Prices are still in the low $200s/tonne, which is solid but not exciting. The signals certainly aren’t there to increase oats production,” he said.

Mr Wiese said it was looking like an average oat year at this stage.

“There has been quite a bit of dry sowing. It is looking like a normal oats crop,” he said.

“We have been blessed with early starts the last few years, whereas this year there has been no break to date. That is going to clean out the on-farm storages of feed grains and hay, so that is a positive.

“The serious oat growers will grow oats but there are not the price signals to increase oat plantings from other growers. The barley price is very solid compared to the oats price.”

Mr Wiese said WA was seeing an increase in processing capacity with Quaker Oats increasing capacity in the last few years, UniGrain buying an existing plant in Wagin where they have made improvements, and the entry into the WA processing sector by CBH with a new oats processing plant under Blue Lake Milling at Forrestfield that is coming on line this year.

“There has been a shift from exporting raw product into Asia to now processing more here and going into the Asian markets,” he said.

“The demand into Asia has been strong, but we have seen an over-reaction to that with high pricing two years ago and then an oversupply. I think everybody is realising the market is increasing, but only gradually.”

Meanwhile, research findings from WA Department of Primary Industries and Regional Development (DPIRD) trials in 2015-17 indicate the varieties Bannister, Williams and Kojonup are typically the best option for April sowing of oat crops in WA.

Bannister and Williams are eligible for OAT1 classification.

Research is showing it has similar yields, structure and flowering time, especially in high-yielding locations.