THE Australian Oilseeds Federation (AOF) has forecast production for the national canola crop now in the ground at 2.4 million tonnes (Mt), up slightly from 2.3Mt produced last year.

In its crop report released this week, AOF has made its first estimate for the current crop year, and forecasts a rise in production from New South Wales, South Australia and Victoria more than offsetting a 450,000t drop in Western Australia.

“Opening rains did not arrive till early June in Western Australia, which is about seven to 10 days later than in 2018.

“The crop in WA is relatively late in terms of crop development and is therefore heavily reliant on very good rain through August and September to achieve current yield predictions.”

While the NSW canola area is up on last year’s harvested area, Mr Goddard said it was more than 40 per cent below the five-year average, and the estimated area for harvest was beginning to fall due to ongoing drought conditions across central and northern NSW.

“There is little to no canola in the north.”

NSW’s seasonal break arrived in stages, starting late March in southern NSW and was followed by a generally very dry April in eastern areas, except for the western Riverina that received follow-up sowing rain in mid April.

“Autumn rainfall was lighter and patchy north of about Parkes.”

“Near average rainfall in May and June, combined with clear skies and warmer than average temperatures is driving growth.

“July has been a dry month and the crop will need average to above-average rainfall and a soft spring to realise potential yields.”

Mr Goddard said early developing crops were at early flowering, but there was a large range in development, and 25-50 millimetres of rain was needed in August to maintain current potential.

“Subsoil moisture is becoming limited in the northern Riverina and further north, while crops south of the Murrumbidgee River are in the best condition with generally more stored soil water.”

Mr Goddard said crops north of about Parkes were being grazed out or will be spray-fallowed shortly on grain-only farms.

“Growers are currently considering their options for grazing and haymaking/silage should the spring fail,” he said.

“Mixed farmers will need to replenish fodder reserves and there remains a ready market for hay with ongoing drought conditions in the north.”

The Victorian crop is currently set up for average to above-average yields but will still need a good spring to achieve this.

As with SA, its break arrived in early May, and was followed by frequent rain that delayed sowing, especially in the Wimmera and the state’s south-west.

Average to above-average rain fell through May, but has been lighter in June and July in the north-east Victoria.

Soil moisture profiles are seen as 40-90pc full, and vary among regions.

“Most crops are at full cabbage stage, with good biomass and bolting to first flower in the north-east.

“The incidence of blackleg has increased in recent weeks with the frequent rain and is similar to SA.

“Depending on spring rainfall growers will be considering the hay option as they did in 2018. However, that is not a consideration at this stage.”

There was little crop sown in the Mallee due to the lack of an early sowing opportunity, and most of the SA crop was dry sown just prior to or following the autumn break in early May.

Rainfall for May-July has followed a similar pattern to Victoria, with July experiencing drier conditions, but with frequent lighter falls.

“Crops are at the budding/bolting stage and have good biomass.”

July featured showery weather, with 10-20 rain days, and this has caused a substantial increase in blackleg infections, with growers now considering fungicide application.

Soil moisture is variable, but mostly seen at 30-70pc full in the main growing regions.

“Spring rainfall will be critical for the crop and there is no talk yet of alternative options to grain.”

WA’s main seasonal break arrived on 7 June for most regions, meaning its crop is very late, and later developing than the 2018 crop.

A large area of WA’s canola was dry sown prior to the break, and crops sown in May on light falls of rain have patchy and staggered emergence, while later-sown crops have established much better.

“A June emergence has meant crop growth and development has been slow.”

Crop-growth stages range from four to eight leaves in northern areas to early flowering around Albany and Esperance, with the latter, along with Geraldton zone, unlikely to reach typical yields due to the poor start.

Following good rainfall in June, July has been comparatively dry, and there is not a lot of subsoil moisture buffer heading into August.

“Above-average spring rainfall coupled with mild temperatures will be needed to maintain or lift current yield potential, at just over 1t/ha, well below the five-year average.” 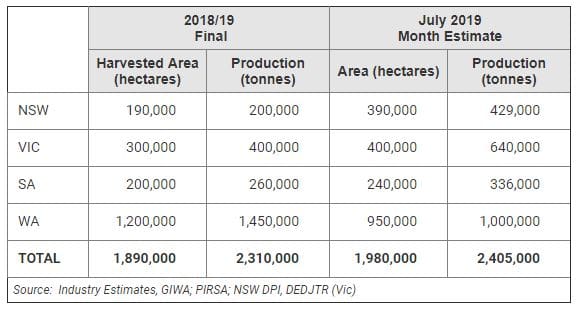