THE COTTON harvest in southern New South Wales has hit its straps this week, with all four gins now operating and ready to process fibre from a record planting of 90,000 hectares, up from 58,000ha last year. 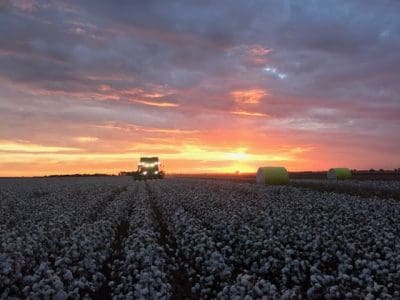 “We haven’t had rain, the air hasn’t been getting dewy, and it’s perfect harvesting weather,” Mr Durham said.

Early picked cotton has been making Strict Middling 21-2 grade, and Mr Durham said the mood in the industry was buoyant.

“Cotton hit $600 a bale yesterday, there’s uncertainty around production in West Texas, and our dollar is weaker.”

“Pending water availability, we are potentially looking at an even bigger year next year.”

Mr Durham said his involvement in contract picking led him to believe that most growers in the southern valleys were planning to plant more cotton this year than they did last year.

Australia’s 2018 cotton harvest is well advanced in Queensland and northern NSW, and with southern NSW’s contribution, is estimated by Cotton Australia to produce around 4.6 million bales all up.

Cotton Australia chief executive officer, Adam Kay, said that had been revised up by 100,000 bales in recent weeks, due largely to exceptional yields in the Macquarie Valley of NSW.

“That figure could even go up a bit further because the weather has been ideal for the cotton, and that’s very good for gin turnout,” Mr Kay said.

Another disappointing year for dryland cotton production in southern Queensland and northern NSW, plus expanding irrigated area in southern NSW, has seen the input of the Lachlan, Murrumbidgee and Murray Valleys increase over this and last year.

“This year will be one of the five biggest cotton years we’ve had, and it wouldn’t be that without the southern valleys,” one trade source said.

“They’re getting close to one million bales, they’ve got the water, and they’re making good margins, so their area is going to be going up.”

Southern NSW’s four gins are expected to produce 700,000 to 800,000 bales from the current season, with the Rivcott and Southern Cotton gins being the largest in Australia.