NEW-CROP canola prices are looking well-supported at current levels as every bit of news colouring the global picture points to steady demand and reduced supply. 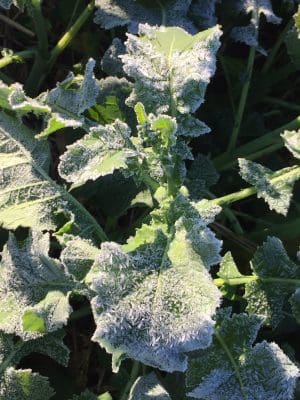 That includes the canola crop now being harvested in Canada, which official forecaster, Statistics Canada has pegged at 18.2 million tonnes (Mt), 7 per cent less than 2016, in spite of an increased area planted.

While the EU is harvesting a rapeseed crop forecast at 2 2Mt, it is trading in a world where stocks are historically low at 5Mt.

“The global supply and demand of canola is equally tight, with crop losses in Canada compounding the Australian situation to make global production the lowest in six years,” he said.

Mr Hall said at values of $530-$535 per tonne delivered port for new-crop, growers who were feeling confident about their crops’ prospects were not inspired to sell.

“Once that price gets up over $550, they’ll start thinking about making sales.

“We are seeing a fair bit of grower selling in Europe, which is putting pressure on the MATIF rapeseed market, and on the Australian east coast, we’ll see domestic crushers getting cover in coming months.”

Trade sources said the impact of fierce and frequent frosts in New South Wales was sure to trim production from the most recent Australian Oilseeds Federation (AOF) crop report posted in July.

This put national production at 3.1Mt, 1.2Mt below last season’s bumper crop, of which around 900,000t was consumed domestically, and 3.4MMT was exported, mostly to Europe.

Orange-based NSW Department of Primary Industries canola specialist, Don McCaffery, said both the area and yield for NSW canola would be down in the next AOF report.

“We had 600,000 hectares and a yield of 1.4t/ha in the last report; those numbers are both going to come back, and we are likely to be 5-10pc down on our production figure of the 840,000t we forecast for the last report,” Mr McCaffery said.

“The first big frost on 20 August whacked the crops across the state; there are some serious losses.”

Mr McCaffery said frosts last week compounded earlier damage to crops, and worst-affected crops were likely to be cut for hay or grazed out.

“There are still crops on the southwest and southern slopes down to Albury that will make 2-2.5t/ha, but that’s relying on an average spring.

“If we get another frost of -5 degrees Celsius, some crops will be in big trouble; frost damage is exacerbated in very dry soils, and that’s what some areas have now.”

Mr McCaffery said Victoria’s crop was in the best shape overall of any state, and canola in southern WA, the NSW-Victorian border, and parts of the southeast and Mid North in South Australia were also faring well.

In southern NSW, canola crops are now getting close to 50 per cent flowering, and are more advanced in the state’s north.

Igrain strategy and development manager, Duncan Whittle, Cudal, said damage to stems from heavy frosts following light rain had had been reported in parts of NSW.

“I’m hearing some pretty nasty outcomes from frost last week; a lot of canola north of Dubbo to Moree and west of the Newell Highway is being cut for hay; it’s a devastating situation for some growers,” he said.

“Victoria is looking to have as good a year, if not better, than last year with higher oil content, but fundamentally, whichever way you look at the crop, it’s not getting bigger.”

Canola values for NSW and Victorian track, or delivered port, September markets are sitting at around AUD$520/t Geelong and Melbourne, $560/t into Port Kembla and around $600/t into Newcastle.

“There’s not much trading at these levels; stocks have been tight in NSW for the past five or six months,” Woodside Commodities Forbes-based broker, Hamish Steele-Park, said.

In August, the USDA’s World Agricultural Supply and Demand Estimates Report forecast US production above the high end of expectations.

Mr Hall said this dealt a further blow to soybean prices, already weighed down by the lacklustre soymeal market which was being impacted by an ample supply of feedgrains.

“If prices in veg oil markets can maintain some strength, it should be supportive for canola, more so than soybeans; canola has around twice the oil content of soybeans, so it usually responds better to an uptick in oil markets.”

After a tough growing season, European canola yields have been slightly better than expected with some minor upward revisions in France and Germany only partially offsetting their import requirement from Australia.

“However something that may reduce European demand is relatively poor crush margins at current prices, with biodiesel prices suffering somewhat due to crude oil weakness.”

Current-crop Australian canola has been sought-after by European crushers in ports as far flung as Liverpool in England, but EU or Black Sea origin is likely to shut out Australian canola in coming months at least.

“Australian canola is currently too dear versus Black Sea values at the moment to be competitive on the export front,” Mr Steele-Park said.

“Europe does prefer higher-oil canola as it’s best for crushing; I would think oil content this year in Australian canola will be lower than last year, as our season overall has not been as favourable, and last year the season here was exceptional.”

Behind Canada, Australia is the world’s second-biggest canola exporter.