Markets for oilseed meals in Australia

Oilseed meal is used as a protein source in livestock feed and complements carbohydrate sources such as feed wheat, barley and grain sorghum.

Demand for meal is driven by growth in the livestock sector. Meal is also used in aquaculture and pet food.

Soymeal prices are consistently higher than rapeseed (including canola) meal on international markets, and Australian importers prefer soymeal over any other protein meal.

Soymeal represents a large share of protein meal inputs in the pig and chicken meat industries as a result of its high crude protein content and high digestible energy content for those animals.

Beef cattle diets comprise high fibre oilseeds and meals such as whole cottonseed or cottonseed meal. In Australia, the beef feedlot sector’s proximity to cotton gins and processors increases the attractiveness of cottonseed and meal because of reduced transportation costs.

The main protein meal for the dairy industry is canola meal, with the majority of the herd in close proximity to major canola-producing and canola-processing regions in south-east Australia.

Over the decade to 2015–16 Australia’s consumption of oilseed meal has risen by 40 per cent to an estimated 1.4 million tonnes (Mt). See chart 1. Soymeal consumption is estimated at around 782,000 tonnes (t), canola meal at 415,000t and cottonseed meal at around 242,000t. The estimates for cottonseed meal include the meal-equivalent volume of whole cottonseed, which can be fed in a raw form after ginning. 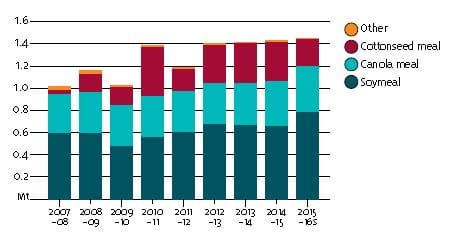 Australia produces mainly canola meal and cottonseed meal. Domestic production of oilseed meals is insufficient to meet demand and so is supplemented by imports. Soymeal fills the shortfall in local supply. See chart 2: 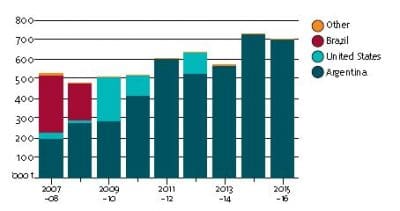 In 2015–16 Australia imported 706,000t of soymeal (mostly from Argentina) and only negligible volumes of other oilseed meals.Over the decade to 2015–16 oilseed meal imports increased as protein meal demand rose with increases in chicken meat, egg and beef feedlot production.

However, the increase in imports was limited by a large increase in domestic cotton production, which enabled substitution to cottonseed meal.

Soymeal is mostly imported into the east coast states, where livestock feeding industries are based. See chart 3. Victoria is the largest importer of soymeal, consumed by major livestock feed industries for chicken meat, layer hens, pigs and dairy. New South Wales and Queensland import significant volumes to meet the needs of the pig, chicken meat and layer hen industries and the beef feedlot sector. 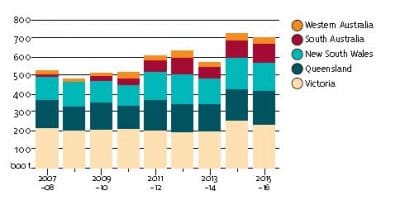