THE Australian Oilseeds Federation (AOF) has cut its 2017/18 production estimate for the Australian crop currently in the ground by 9 per cent to 2.855 million tonnes to reflect the impact of a dry start in Western Australia, and a dry and frostbitten growing season in NSW. 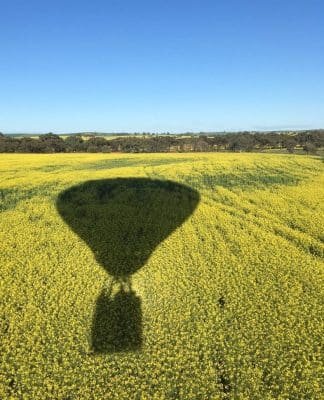 A canola crop at Northam in WA. Image: Glen Brayshaw

“At less than 3Mt, this would be the smallest canola crop in Australia since the 2010 harvest,” AOF executive officer, Nick Goddard, said.

AOF’s initial 2017/18 estimate released in July pegged production at 3.122 Mt, and in its revised estimates released this week, a 26pc drop in the NSW estimate from 840,000t to 621,000t has accounted for much of the downward revision.

The Bureau of Meteorology is forecasting dry conditions for the rest of September, and Mr Goddard said kinder weather in October was likely to come too late in the season to improve the yield outlook.

“In WA, the BOM forecast for average to slightly above average rain may enable a final boost to crops in the more southern cropping districts.”

Except for the far southern slopes and Murray Valley, rainfall across growing regions has been in the lowest 10-20pc of historical records over winter.

This has resulted in most crops having lower biomass than usual, and the NSW crop is seen as having potential for further downside.

Crops are in reasonable condition in the southern parts of the southwest slopes and along the Murray River, but soil moisture in these areas will be exhausted in the next fortnight, and rain is needed to consolidate average yield potential.

Severe frosts have hurt the state’s yield potential: temperatures of -2 to -5 degrees Celsius caused major crop losses to late flowering and podding crops in northern NSW in particular, but also in central west and southwest NSW.

Further severe frosts on 28-30 August brought temperatures of -3 to -6 degrees, and damaged crops in central and southern NSW.  The extent of the frosts can be seen here.

How these crops recover will depend on mild temperatures and rainfall in the next 2-3 weeks.

Soil moisture is described as almost non-existent in central west and northern NSW, and some crops do not have sufficient biomass to be economic even for hay production.

Some frost-affected crops will be cut for hay, and others forecast to yield as little as 0.1-01.5t/ha will be maintained through to harvest for grain recovery, weed control and early fallow commencement for 2018.

Blackleg and sclerotinia disease levels have been low this season due to the very dry conditions, but fungicide has been applied for sclerotinia as a preventative measure.

Aphids have required control in many central and northern NSW crops.

Crop conditions are described as near perfect, with soil moisture profiles close to full across the state, and most crops now in full flower.

While there have been reports of mice eating flower buds and causing some issues in the Mallee and Wimmera, this is unlikely to have a significant impact on yield.

Despite generally cold conditions during August, frost damage is not seen as being a factor.

With average rainfall forecast, yield potential is seen as having some upside, particularly in northwest and central areas.

Conditions in SA are extremely variable, with crops on the Eyre and Yorke peninsulas and parts of the Mid North only emerging after rain in late June and early July.

Many crops in these areas had been sown dry and establishment has been variable; these crops will flower much later than normal and for a shorter time, so they will be reliant on a very good spring to produce acceptable grain yields.

The overall average yield for SA has been adjusted down to 1.25 t/ha based on the effectively late sowing date on Eyre Peninsula in particular.

Other areas of South Australia had crops established at about the normal time, and these are at the early to mid-flowering stage, and generally have at least average yield potential.

Rainfall in July, August and early September has generally been good and most areas have good levels of subsoil moisture.

In some areas, mice have caused some significant damage to emerging crops, and some crops have been sprayed out and sown to alternatives.

August has been kind to canola in the southern half of the WA growing region, with rain and some warmth, but the northern crop is not seen as having potential to improve following its very tough start.

Beyond the Esperance zone, canola development is seen as being a few weeks behind the 2016 crop, and a kind spring is needed to consolidate yield prospects.

The Esperance crop has suffered no setbacks since its April sowing and is at early pod-fill; a delayed start in the Albany, Geraldton and Kwinana zones has meant these crops are now in full flower.

Diamond-back moth has appeared in the Esperance-zone crop, and aphids in all southern and central districts have required spraying.

With weed numbers higher than usual, late weed control through swathing and desiccation may pose a risk to oil content; late development of the crop is also likely to drive oil content lower.

Soil moisture across the southern half is generally very good, but temperatures need to remain mild for forecast yields to be reached.

Compared with last year, the frost risk to WA crops seems to be low.