IN A world first, researchers from The University of Western Australia (UWA) in collaboration with Punjab Agricultural University in India have found the key to resistance to sclerotinia stem rot, a major fungal disease in brassica oilseed crops such as canola and mustard. 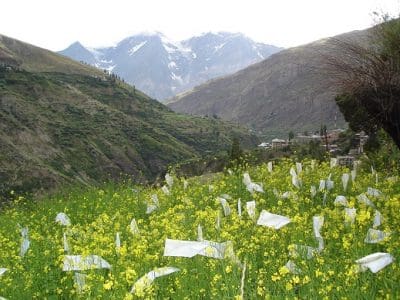 Oilseed crosses in the Himalayas that were part of the sclerotinia resistance trials.

Sclerotinia stem rot poses a major yield limiting threat to these crops worldwide, and currently, no commercial varieties with high level resistance to this disease are available.

The research, published in the international journal Scientific Reports, showed that resistance to Sclerotinia stem rot disease found in Indian mustard is influenced by at least 10 genes.

UWA’s School of Agriculture and Environment and Institute of Agriculture professor Martin Barbett said the findings are exciting because they offer highly significant oilseed breeding applications and benefits.

“The findings offer mustard and subsequently canola breeders a powerful tool to optimise use of the genetic variation available within wild Brassica species.”

Currently farmers rely mainly on fungicide sprays to manage the disease, but these often provide poor or inconsistent control.

As forecasting this disease has proven unreliable, fungicides are often wasted in cases where little disease would have eventuated anyway, adding to the already high production costs for low-input farming systems such as in Australia and India.

“Initially for mustard crops and later for canola, such novel engineering to develop new oilseed Brassica varieties that express these critical resistances to sclerotinia stem rot will enable much more effective management of this devastating pathogen worldwide,” Prof Barbetti said.

The findings were published in the paper Mapping resistance responses to Sclerotinia infestation in introgression lines of Brassica juncea carrying genomic segments from wild Brassicaceae B. fruticulosa in Scientific Reports. The research was supported by the Government of India and the Indian Council of Agricultural Research.