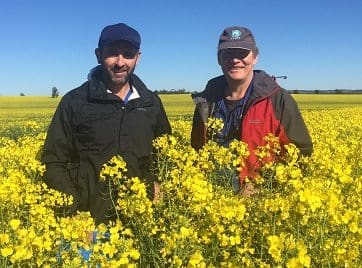 Through the Optimised Canola Profitability project – a collaboration between the GRDC, CSIRO, New South Wales Department of Primary Industries and the South Australian Research and Development Institute (a division of Primary Industries and Regions SA) – 34 field experiments were conducted from 2014 to 2016, looking at the interaction between variety and sowing date.

The experiments were located at 14 sites, from Eyre Peninsula in South Australia and the Wimmera in Victoria through to the central-west slopes of NSW and the Darling Downs in south-eastern Queensland.

One of the project leaders, CSIRO research scientist Dr John Kirkegaard, says the traditional canola sowing window in much of the southern and eastern growing regions has opened in late April, continuing well into late May.

“The project was established to quantify potential yield and grain quality benefits from sowing crops in early to mid-April and has focused on tactical agronomic requirements to achieve successful outcomes. We have been looking at varieties that are suitable for earlier sowing and how they should be managed.”

The guidelines for early-sown canola, developed with Rohan Brill (NSW DPI) and Andrew Ware (SARDI), have been published in a new electronic Ten Tips to Early-Sown Canola brochure, available at https://grdc.com.au/10TipsEarlySownCanola.