THIS YEAR is likely to be one to forget for the Australian canola industry, and not just in terms of reduced area and yield outlooks brought on by dry conditions in many growing areas. 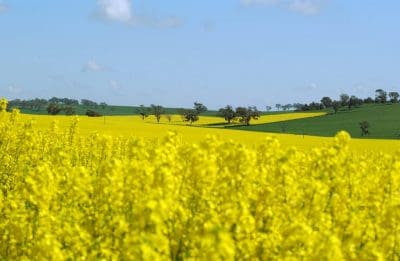 For seed companies, sales revenue and end-point royalties (EPRs) will be well down on levels of recent years because of reduced plantings, which have seen some growers return hybrid seed or cancel orders at the close of the optimum April-May planting window.

However, parts of each state have had a reasonable start to the season, and will provide the commercial proving ground of HyTTec Trophy.

It is one of several F1 varieties to hit the market this year, and is testing a new revenue model which its owner, Nuseed Australia, said would reduce the “up-front hurdles” faced by growers by charging an EPR rather than a sole point-of-sale (POS) royalty for a hybrid.

Trophy will attract an EPR of $10 per tonne, double that of most open-pollinated (OP) varieties, and the seed price at around $18.50-$20/kilogram sits between OP varieties at roughly $10-$15/kg, but below the $25-$38/kg charged for most other hybrids.

Until now, EPRs have been payable on OP varieties, most of which come with triazine-tolerant (TT) genes, while hybrid seed is generally sold with a built-in POS royalty.

“Growers are very supportive of our current EPR arrangements on open-pollinated varieties and the EPR program for HyTTec varieties will operate the same way,” Nuseed commercial manager, Andrew Loorham, said in a 2017 Nuseed statement.

“We’ve conducted extensive market research to get a good understanding of growers’ views on the factors at play when they’re looking at the current hybrid offers in the TT segment, and we’re confident we’ve addressed one of the main barriers with our commercial offer.”

However, some growers felt seed companies were already “double-dipping” on selected varieties on seed with a price inflated by a POS royalty, and with EPRs payable also on delivered seed.

Industry sources said growers found it difficult to justify paying for expensive hybrid seed, even though yield gains and improved agronomic benefits like frost and blackleg resistance had been proved in National Variety Trials (NVT) and other trial results.

“Either have an EPR and cheaper seed, or expensive seed and not an EPR,” one industry source said.

“I just don’t agree with seed companies extracting at both ends.”

However, yield benefits from hybrid over OP varieties would indicate that seed companies have every right to do just that.

“If Trophy is earning you an extra $400-$500/ha in additional yield over what you’d have gotten from, for example, Bonito, then maybe the growers have to pay $100 of that to the seed company.”

“That’s where you’ll get discontent – if the grower doesn’t get a 5:1, or even a 1:1, return on their investment from their hybrid seed.”

One NSW grower told Grain Central the tough start to the 2018 season made hybrids unpalatable due to their higher up-front cost.

He said OP seed retained on-farm could be graded to get rid of small seeds, which were notorious for producing low-yielding plants, whereas not all hybrid seeds were large and even in size.

“OP seed costs half or one-third the price of hybrids, so planting it reduces your overheads dramatically from the start.”

OP varieties of evergreen popularity including Bonito, Gem, Mako and Wahoo are believed to account for up to two-thirds of Australia’s canola production.

“Some of those varieties are similar genetically, and I’m concerned about where the next OPs are going to come from.

“The signal from the grower is they want to grow OPs as well as some hybrids, but seed companies are putting their energy into hybrids.

Bayer’s [email protected] has emerged as another sweetener to growers who baulked at the cost of hybrid seed.

It enabled growers to take delivery of seed for planting in the current crop year, but does not require them to pay for it until 30 November.

“Breeding companies are trying to come up with strategies to spread the risk for growers in growing hybrid varieties. Having a lower upfront cost and an EPR rather than the full cost at the POS makes sense.

“In WA, if we have a late break to the season OP varieties suit those costings when lower yields are expected.”

While growers do watch their spend on seed, Mr Lamond said they appreciated the fact that seed companies were only covering costs of their breeding programs through EPRs on OP varieties.

“Through growers, we are hearing that both OP TT and hybrid canola varieties are needed in the system, but as a grower organisation, we can’t influence the policies of the seed companies.”

“The system around canola is strong, and it’s up to the individual seed companies to find their appropriate commercial model,” Denis McGrath said.

While the vast majority of growers correctly declare the varieties of canola they deliver so EPRs can be charged, industry sources have said some intentional and accidental misdeclaration deprives seed companies of some income to which they were entitled.

“The growers have created a situation which has been complicated by some people not delivering what they say they are delivering.”

While Nuseed is expected to release further canola hybrid varieties which feature mid-priced seed and require payment of EPRs, it is not a path other hybrid seed companies seem keen to follow.

GenTech Seeds is the wholesaler of Pioneer canola hybrids, and its chief executive officer, Peter Kleinhanss, said the company had made a business decision not to employ an EPR structure on its lines.

“There are no examples anywhere in the world where an end-point royalty model is successful for hybrids,” Mr Kleinhanss said.

GenTech is one of Australia’s hybrid seed companies which sees continued expansion of the market.

“Since 2005 with the introduction of herbicide-tolerant canola, each year has seen a significant lift in the demand for hybrid seed which we have strived to match year on year.

“We believe seed companies do have the capacity to supply a greater percentage of hybrid seed to growers if they require or order it.”