Water-repellent soils got a workout in WA this week with a view to improving farm long-term outcomes on weed management, soil erosion and crop establishment. 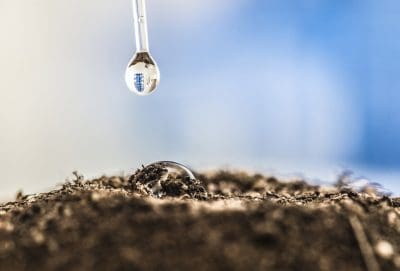 “Soil water repellency affects up to 10 million hectares of sandy soils in southern and Western Australia and it leads to poor crop establishment, increased weed management costs and the risk of soil erosion,” Dr Ward said.

“Those tell-tale signs of dry patches of soil, even after substantial rainfall, are caused by plant waxes and microbes that mix with or coat soil particles, restricting the absorption of water.”

“What we found in field trials at Munglinup and Pingrup is that rainfall can soak into the ground more effectively in no-till and stubble retention systems, ensuring better crop emergence.”

The GRDC-funded field trials, conducted in collaboration with the Department of Agriculture and Food (DAFWA), examined patterns of water movement into the soil and measured the annual impacts on crop emergence and grain yield.

“The combination of no-till and residue retention was found to preserve root pathways in the soil, allowing water to enter despite the water repellent soil layer,” Dr Ward said.

“However, these strategies must be practiced for several years before improvements to soil water, crop establishment and yield become evident.

“When used in tandem with intensive cultivation treatments such as deep ripping, this combination reduces the risk of soil erosion and creates new water entry pathways.”

Treatments were applied annually to each plot for five years until 2012, when the entire trial reverted to no-till and stubble retention to assess the speed of recovery from cultivation and stubble burning.

Dr Ward said the trials show that seeding crops on or near the old crop row promotes water entry through root pathways from the previous year’s crops, increasing moisture content in the furrows and improving crop emergence.

“Wetter furrows were also shown to promote microbial activity by wax-degrading bacteria, resulting in significantly lower water repellency than in the inter-row,” he said.

Dry sowing of water repellent soil should be avoided, and where practical, these soils should be sown later in the seeding program after the seasonal break, or directly after a rainfall event.

“If dry seeding a water repellent sand is unavoidable, sowing close to the previous year’s crop rows appears to give better results than the more conventional inter-row sowing.”

“This is due to reduced water repellency and increased water infiltration down old root pathways.”