THE Russian Wheat Aphid (RWA) may not have found its way to the northern cropping areas yet, but it is only a matter of time before it does, according to Queensland Department of Agriculture and Fisheries principal entomologist, Dr Melina Miles. While RWA was first detected in South Australia’s mid north in May last year and has since spread throughout the cropping areas of South Australia, Victoria, Tasmania and southern NSW, to date the most northerly occurrence has been in the NSW Riverina.

“But what we know from modelling done in the 1980s when Australia was preparing for RWA is that central NSW, northern NSW and southern Queensland are the most likely areas to sustain big populations of RWA, primarily because of the opportunity for them to over-summer on grass weeds. The summer rainfall potentially enables them to ‘hang in there’,” Dr Miles said.

Speaking at GRDC Updates in the northern farming area, Dr Miles said the risk of RWA infestation causing damage to crops was highest in spring.

“For those who seed-dress their crops, the seed dressing is starting to expire by now. In the south they are starting to see RWA infestation in crops that had been seed-dressed and are eight to 10 weeks out of the ground,” she said.

Dr Miles said northern growers needed to be on the lookout for the tell-tale signs of RWA: 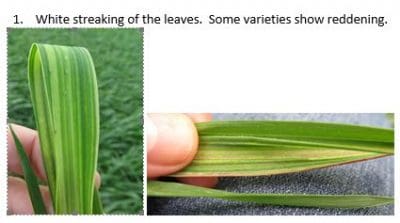 If growers see these symptoms, they should then look for the aphids and inspect them (a hand lens with X10 magnification is ideal) for the features that distinguish RWA from common aphids such as the corn aphid, the oat aphid and the rose grain aphid: 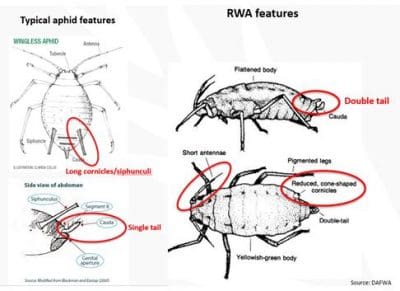 “When the outbreak was on in southern Australia, the agronomists said as soon as they saw them the bright green and the elongated shape told them immediately this was not a species they had seen before,” Dr Miles said.

The following thresholds are recommended:

“The thing to be aware of is the RWA is as susceptible to natural enemies and predation by things like lace wings and lady beetles, and to parasitism, as any other aphid species we have. This is probably going to be the major way the RWA is going to be controlled,” Dr Miles said.

“But in the event of an outbreak or populations that exceed thresholds, it is probably one of the most benign species that has come in recently. It has no resistance to insecticides.

“If control of RWA is warranted, there is a current Emergency Use Permit for chlorpyrifos and pirimicarb. If possible, use pirimicarb first as it will kill aphids, but not the beneficial insects in the crop.”