SORGHUM growers across New South Wales and southern Queensland are on the lookout for rain to shore up crop quality and yield as paddocks dry up sooner than expected from last year’s flooding events.

Early planted sorghum in some regions is faring well and is predicted to produce above-verage yields, with harvest to commence in coming weeks.

Most late November to early January planted crops are struggling from the lack of decent rainfall and will need a top-up well before harvest around May-June.

Darling Downs grower Stuart McIntyre has 1000ha of sorghum planted at his property near Jondaryan, said there was a clear difference between his early and late-planted crop, and plants that were under a shower and those which missed out.

“This season set itself up to be a really good with all the rain and regular rain up until the middle of December and then the tap turned off,” Mr McIntyre said.

He said there were a few isolated showers in January, which only benefited sections of his property.

“There were a few showers around in the beginning of January and that’s when it became a mixed bag for us.

“The earlier planted sorghum which grabbed that is looking fantastic.

“It could still do with another drink, but is still pretty positive and looking at a pretty good yield.” 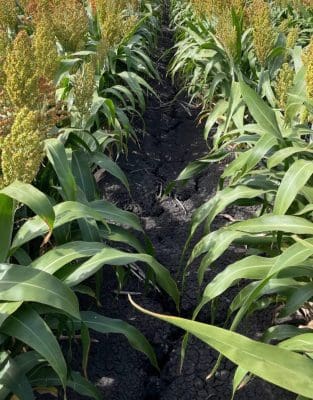 Some growers on the Downs are now seeing deep cracks in soil due to paddocks drying out. Photo: Stuart McIntyre

He said the December planted sorghum is in dire need of rain and has “really started to struggle”.

Mr McIntyre said the sudden shift from wet paddocks to dry, cracking soils was “frustrating more than anything”.

“I think we will get something out of [the December-planted sorghum], but again looking at it from such a great potential start to the season to where we are now is a bit disappointing.”

Early crops to yield above average

West of Mr McIntyre in the Condamine region, grower Ben Taylor is weeks away from harvesting about 1400ha of early-planted sorghum.

Unlike growers east of Dalby, Mr Taylor and many in his district received well-timed and soaking rainfall earlier this month.

“We got saved, we got rescued with the January rain, because it was…starting to look for a drink and really hadn’t got its secondaries away and then we got 37mm of rain,” Mr Taylor said.

The region then had more follow-up rain, which served to further boost the crops prospects.

“It will be an above-average yield there is no doubt about that.

“We are really happy with the crop.”

Mr Taylor said the positive outlook has come after a far-from-ideal start to the season.

He said while December 2022 was the sixth driest on record for his farm, October was the wettest by about 110mm.

“Come October, when we had 252mm…it absolutely swamped the young sorghum coming out of the ground.

“There was a combination of cold-tolerance issues and waterlogging and possibly even some chemical damage due to the excessive rain.

“Then it just grew out of it, and it is looking quite good, if a bit patchy as a result.”

Nutrien Ag Solutions agronomist Angus Dalgliesh, who is based in Dalby, said reports of mixed crop quality were widespread throughout the Downs.

“The majority of the spring-sown crops have got through it pretty well,” Mr Dalgliesh said.

“They’re some nice-looking crops and people are just about spraying them out now or have started to.

“There were some crops planted in November and they are looking okay and will scrape through, but anything planted late November and early December is really starting to hurt now.”

In addition to hitting crop growth, the weather shift also resulted in a reduced plant.

He said many growers had to delay September planting due to wet paddocks, which was followed by cuts in late plantings because the ground was too dry to support it.

“Our early plant was pretty well bang on what we thought would go in, or back a little back, because in September there was still a few storms coming through and it was too wet to get on paddocks.

“About 80pc of the early stuff went in on time.

“In the November-December plant, we would be back to 60pc in them due to the dry paddocks.” Despite being hit with more prolonged rainfall and persistent flooding than their northern neighbours, NSW growers also reported seeing the effects of a seasonal shift from wet to dry weather.

She said growers took the opportunity when they could to get a crop in the ground.

“As you come down to the Liverpool Plains, there are people who have taken the opportunity to try and plant early January.

“The majority of the crop that I have seen, certainly traveling from Tamworth up to Mungindi…seems to be split into either the grain-fill stages or the crops at that 10-12 leaf stage and getting close to flowering.”

Ms Serafin said many growers were hoping for some decent rain in the coming weeks to push the crops further.

“Small falls of rain have been good to soften things up, but generally we have seen…the soils really crack open and the crops would really like some rain.

“I think there are quite a few people who are hoping that there will be some rainfall out of this front coming through at the moment.”

Mungindi grower, Sam Heagney of South Bunarba Agriculture said he, like many in his district, took any opportunity they could to get a crop in the ground.

He said his September and late-December planted crops were sown later than expected.

“It is extremely frustrating having it go from being extremely wet with a full profile to have it set hard on top from the floods,” Mr Heagney said.

“In the end we were able to get some late sorghum in, which is unusual, but it was a case of a bird in the hand is worth two in the bush.”

Mr Heagney said he will begin harvesting the early crop in late February.

He said these crops are “looking good” and should yield above average.

It is still too early to tell how the December crop will develop.

“There is a lot to happen there, so we will see how it goes.”

On a positive note, agronomists in NSW and Queensland have reported limited pest infestation or damage this season.

Ms Serafin said, unlike previous years, there have been minimal reports of mice, but Rutherglen bugs and heliothis are around.

“Definitely for the crops near flowering at the moment, there has been a fair bit of Rutherglen bug pressure.

“Some of that is no doubt because those insects are moving out of crop that has been harvested.”

Mr Dalgliesh said he has seen heliothis in early crops, but minimal infestation in later crops.

“Heliothis was very high in the early plant, but they have backed off.

NSW and Queensland are expected to produce 2.6 million tonnes of sorghum this season, according to ABARES December Crop Report.

This is the fourth highest on record.

Most of this will come from Queensland, with 1.9Mt, a 7pc increase on last year.