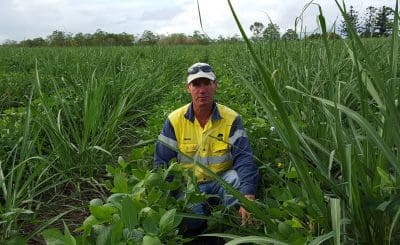 As part of his Nuffield studies which focussed on the beneficial and predatory microbial activities that are crucial to sustaining productive soils, Mr Mattsson visited New Zealand, the United States of America, Brazil, Peru, Chile, Kenya and South Africa.

Sugarcane production at Mackay has suffered a nine per cent decline every five years for the last 20 years, something that Mr Mattsson believes can be reversed by building soil health through promotion of plant diversity and biological activity.

“I actually think in years to come we will discover that all the different types of biology have a symbiosis with various different plant species, and if you want a range of biology in any agricultural situation, you will need a range of plants, otherwise you’ll just limit your biological diversity which will limit your farms productive capacity and increase your environmental impact.

“One of the biggest differences between the really resilient, successful farmers and the rest is their ability to take full advantage of the key elements that as farmers we all get, and are free: sunlight, rainfall, carbon and nitrogen.”

Mr Mattsson believes the Queensland sugar industry has not paid enough attention to the potential of maintaining a balance of soil biology, but improvements can easily be made to soil conditions if the following key principles are applied in unison.

“You need to implement a continuous regime of minimum mechanical soil disturbance, maintain permanent organic soil cover and a living root in the soil as well as plant diverse crop species in sequences or associations,” he said.

“These are four linked principals of Regenerative Agriculture (RA) – an approach to managing agro-ecosystems for improved and sustained productivity.

“RA is a system, not a recipe, and adopting only one or two of these principles will either not work or only give limited results.”

On his own farm Mr Mattsson has experimented with multi-species intercropping trials to enhance soil biology, planting sunflowers and sugarcane in the same season, and within one metre of each other.

“Utilising sunflowers on cane farms to enhance soil health is by no means a new practice, but they’re normally planted as a fallow crop,” he said.

“I believe planting in this way – in the same season and directly alongside the sugarcane – is a first for the Australian sugar cane industry.

“Sunflowers have a number of nutrient benefits compared to that of sugarcane, and being a broad leaf they have the added benefit of providing host for another range of biology.”