WHEAT growers have long relied on their ‘gut feeling’ along with knowledge of seasonal conditions, sowing guides and predictive climate models to determine winter planting times. 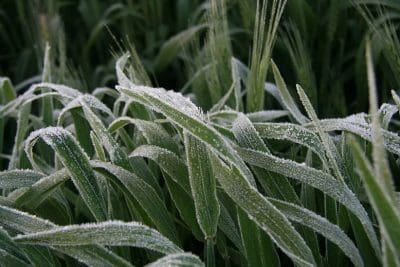 But new research funded by the Grains Research Development Corporation (GRDC) aims to offer growers another tool to consider when assessing regional planting dates by examining the varied impact of frost on paddocks of different elevation.

“Of all the agronomic levers available to growers planting date still offers one of the greatest abilities to increase yield potential,” Mr Gardner said.

“It is also one of the few management tools that can be changed at no additional costs to the grower.”

“But with earlier dates comes an increased risk of frost. However, sowing later to minimise frost risk then pushes crops to grain fill under hotter spring conditions, which can lower yield potentials.”

The NSW-based researcher said the key question was are growers losing yield with current planting dates, and what tools were available to reduce the risk of frost when sowing early?

“Growers generally take a conservative approach to planting dates, because their fear of frost outweighs their concerns about yield loss from heat stress,” Mr Gardner said.

But he said trials from 2014, 2015 and 2016 at various NSW sites, including Gurley, the Liverpool Plains, Spring Ridge and Premer, found there was a significant potential yield advantage to planting early, while minimising frost damage.

“We found there were drastic changes in frost risk with only a change in elevation of 20-50m, which presents a major opportunity for growers to bring forward planting dates without necessarily increasing their frost risk,” Mr Gardner said.

“Lower points in the paddock have more frost events with greater duration compared to higher elevations and the accumulative impact of this is slower crop development in the lower areas.

“In contrast, we found there was little variation in maximum temperatures across various elevations; so in the lower parts of the paddock, where the frost risk persists for longer, the heat stress will start at the same time as high elevations. This narrows the window for optimum conditions for flowering.”

In on-farm terms Mr Gardner said taking into consider the impact of planting times on elevation could create major gains for growers.

“On the Liverpool Plains for example assuming a wheat price of $250/t the late April planting date created an additional $425/ha and a $1155/ha net return compared with the mid May and early June planting dates, respectively at the top of the slope over a three-year period,” he said.

“Even last season (2016) when there were ideal spring conditions there was still a 1.34t/ha yield penalty for delaying planting dates from late April to early June.”

Mr Gardner said research has long supported the production and economic benefits of early planting, but the latest trial work also highlighted the impact of frost risk in the crop equation and how growers could combat it.

“This work highlights the opportunities available to growers to plant higher parts of their farm earlier without increasing their frost risk,” he said.

Mr Gardner said any grower with access to a GPS could essentially measure elevation across their farming country and time their sowing to maximise yield potential.

“So, elevation can be used as a valuable tool to evaluate frost risk, but growers should also consider other factors like drainage, aspect, tree lines and position need to be considered.”